A new mixed-use tower by Sydney-based practice Koichi Takada Architects has been designed for downtown Los Angeles. With the potential to rise as high as 63 stories, the project was inspired by California’s redwood trees and Marilyn Monroe’s iconic wind-swept skirt. Dubbed Sky Trees, the project will include clustered towers clad in timber mullions that transformed into free-flowing wooden awnings at the base of the project.

The tower is the fourth major project KTA has designed for Sydney property developer Crown Group, and it is the company's first project in the United States. Crown Group previously submitted plans for a 52-story tower with 528 residential units and ground-floor commercial spaces for the site, but the new 63-story scheme has an undisclosed amount of additional units.

Located at 1111 South Hill Street close to the Staples Centre sports arena, the project will join a growing east-west spine of towers near the Figueroa Corridor. The design's canopy will include a “breathing green wall” to improve the city’s air quality. Architect Koichi Takada said that the project has the potential to become another “Instagram moment” for Downtown Los Angeles. The team goes on to state that the design would seek to incorporate a “human scale” despite its height. “We want our tall building designs to be more engaging to the public to contribute to the community by activating and creating a connection with the neighborhood.”

The new Sky Trees tower has the potential to become one of the tallest buildings in Los Angeles. A timeline for the project has not been announced. 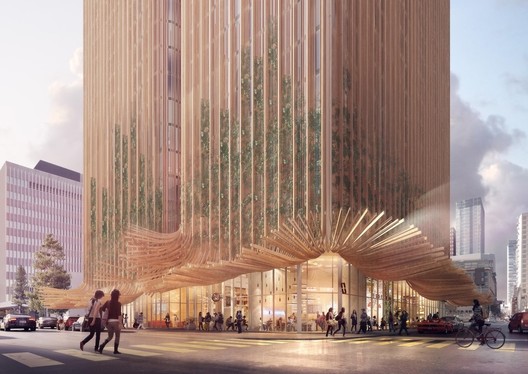