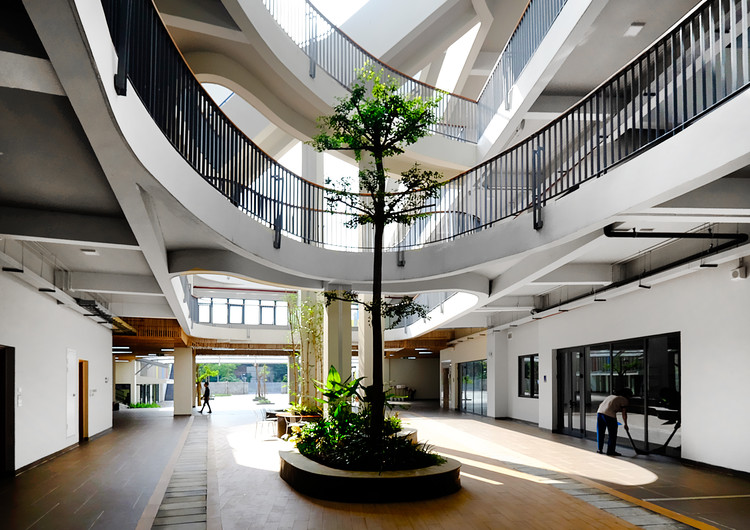 Text description provided by the architects. The site of school is located in Hanoi, which is asymmetric and surrounded by lots of tower blocks. The school comprises a kindergarten, primary, and secondary school. It not only has separated playgrounds divided by ages but also a common playground, which could be used by everyone.   To fit in the asymmetric site and create playgrounds separately, the school is designed with a zigzag form through the site. Series of continuous spaces which like a loop combined with a flexible bridge corridor system creating serial changes and unexpected views for the users. By this design, classrooms are oriented to the North and South and maximize collecting of natural light and ventilation. The sports field, gymnasium and canteen are placed at the end of wind direction, as a result noises are effectively reduced.

The shape of the building represents the growth journey of a child and main functions are arranged by the path which is appropriated with the age. The start of the path is a block serving for kindergarten. The following block is for primary school in the lower floors and secondary school in the upper floors. The fifth floor is served for artistic activities, music and research. A series of playful gardens are interposing between study blocks and rooftop garden with diversified type of plants, not only help to stimulate pupils’ interest in biology but also can be considered as an effective solution for heat-insulating and air filter.

With the purpose of forming an attractive and lively school, the window system on the facade are designed in different size and colors. It is also arranged randomly making an interesting and childlike look for the pupils. Additionally, there are colorful canopy system above each window which create shadow and prevent classrooms from oblique sunlight. The color of the school is in a neutral white and brown. Furthermore, the cheerful colors of the louver system outside the swimming hall and canteen also add playfulness and creativity to the appearance.

Besides, the main playground in between the blocks not only helps to collect natural light and ventilation but also play as a buffer zone for noises. With the roof garden and green playground, the school looks like a green center among surrounding tower blocks, creates an eye-catching point of view from the above. 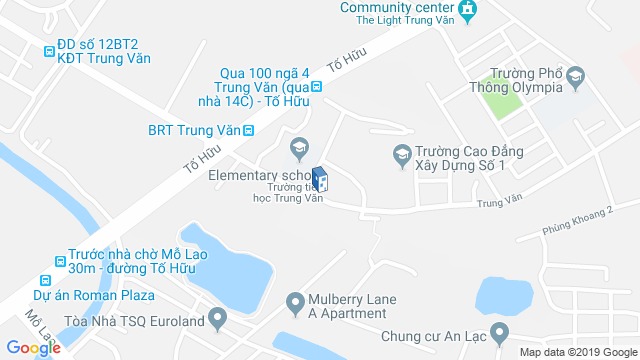 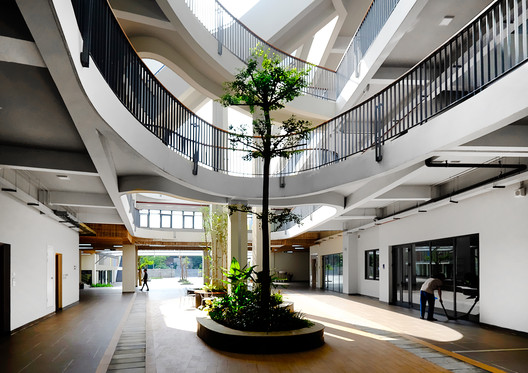