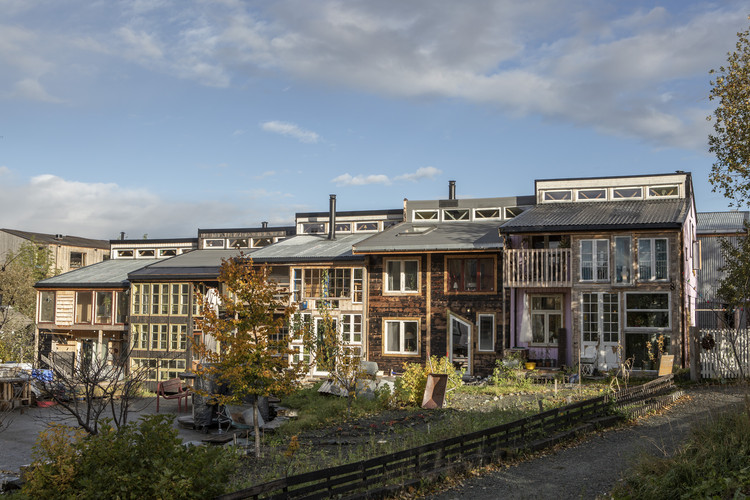 Text description provided by the architects. The five self-built experimental houses at Svartlamon, a project initiated by the young architectural practice Nøysom arkitekter when they were still students, explores how architects can work towards a more frugal and sustainable use of resources by creating open-ended architectural frameworks that facilitate man's natural adaptive capacity. By encouraging self-building and user participation, the result has not only been five houses with a square meter price of one-fifth of market price, but also a varied and rich living environment with a unique architectural quality.

The architectural concept was developed in a process spanning two years. The architects first created a sketch project with participation from the local community, and later developed the project with the future residents, a chosen group of self-builders. The result is a simple, yet versatile architectural framework of five compact row houses and a common house, that the self-builders have been able to adapt to their needs and preferences, both as individuals, neighbourhood and part of a local community. The main design criteria have been that the houses would be able to be built easily with minimal use of specialists, that they would fit into the existing structure of low-rise wooden buildings at Svartlamon, and that they would accommodate reused materials and components.

The load bearing construction is a simple and inexpensive stud frame made from Norwegian spruce. The foundations are concrete pillars, made on site by the self-builders themselves, who have even welded the rebars themselves. The houses are naturally ventilated, and breathing insulation is lining the walls (hemp and wooden fibres). As this is a self-build project, the houses rely on as few complex technological systems as possible. The most unusual part of the structural design is the self-built wooden trusses between the two shed roofs, which allows a spacious and flexible double high living space with clerestory windows. The high windows also contribute to efficient natural ventilation, in combination with the greenhouses in front, that functions as solar chimneys. Within this simple framework, the self-builders have been able to create unique expressions of their own desires, choices, and creativity with an interior budget of only 5000 EUR each.

During the two year construction period the architects have followed the process closely, giving advice and helping the self-builders, who had no previous building experience, on site. There has also been a professional carpenter helping out, employed by The Housing Association at Svartlamon, the non-profit organisation that leases the land at Svartlamon from Trondheim Municipality, running it as an urban ecological area. The self-builders are renting the houses they have built from The Housing Association long term, for a cost that covers the loan expenses. Svartlamon is unique in Norway, not only because of the area's special zoning plan as an urban ecological research area but also because of the local community and The Housing Association's willingness to support and contribute to initiatives that move into uncharted territory.