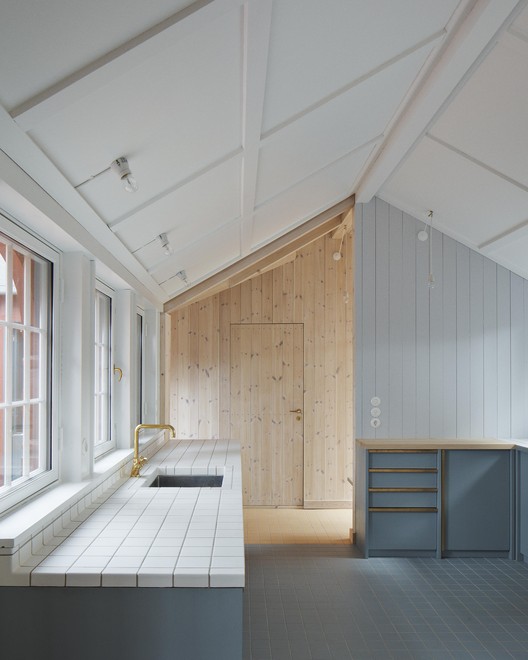 Reinterpretation of historic cottage and shed
The cottage is located in a protected landscape with historic vacation homes carefully placed in slopes of overgrown moraine and sand dunes, rising from surrounding flatlands. The reconstruction’s ambition is to recreate the sense and atmosphere of being in the old house before it was left unused and timber infestation made a rebuilding unavoidable.

Built in 1905 as two detached log houses later merged by the addition of a kitchen, the house was gradually transformed, including architect Ivar Bentsen’s addition of a stove and chimney, and supplemented by a shed. The interior acquired a dense layered atmosphere of partly painted wooden surfaces, peculiar alcoves and niches.

The structure is rebuilt as a wooden light-frame construction, allowing an exterior based on the protected expression of the old house. The new interior interprets memories and accumulated features for contemporary conditions, informed by the modern structure.

Exterior walls are internally clad in wide horizontal boards referring to formerly exposed logs, the walls separating rooms are clad in thinner vertical boards. Pressure resistant roof insulation enable an exposed placement of the rafters under the ceiling. The original disposition of rooms is slightly altered, walls separating shared spaces are removed, though still present through material separation. A tile grid is laid out in the hallway, kitchen and bathroom, shifting in colour between the spaces. Wooden walls are left untreated or painted in colours drawn from the former interior. Niches and alcoves are recreated by leaving wooden surfaces unpainted.

These strategies allow rooms and the overall disposition to be continuous yet separate, introducing a density of personal unconventional spaces. The original house’s complexity is reinterpreted as a clearly defined patchwork of shifting materials and colours, visible from one room to the next, creating a contemporary space pragmatically reinterpreting the past.

The shed was built as an addition to a cottage in a protected landscape with historic vacation homes carefully placed in slopes of overgrown moraine and sand dunes, rising from surrounding flatlands. The reconstruction’s ambition is to recreate the sense and atmosphere of the old shed before it was left unused and timber infestation made a rebuilding unavoidable.

A weathercock on the original shed is engraved with its year of construction, 1905. When the shed was later extended to its double length, the original gable was kept as a central partition wall dividing the space into two. The foundation of this wall is kept as a trace in the new structure, acting as base for the lone pillar carrying the new ridge beam.

The new shed is built based on a thorough survey of the old, with some adjustments. Pinewood makes up the structure. Spruce cladding is untreated in the interior, with the ceiling boards painted in a grey blue shade stemming from the main house. Old bricks from the main house terrace are reused for the floor. The original roof structure used collar beams, making it impossible to move upright through the shed. The new structure consists of rafters resting of on the ridge beam and the outer wall structure, to on one side lined with built-in shelves, enable one uninterrupted space.