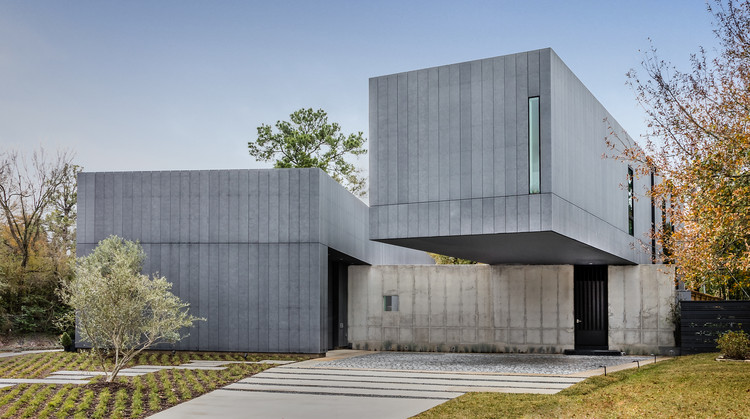 Text description provided by the architects. A fairly simple building, this house has two distinctive features, the 35-foot cantilever of the 2nd floor and the atypical site plan with dual courtyards substituted for the traditional suburban backyard. Both of these features are a direct result of 3 fairly prosaic goals: the client’s desire for privacy, an efficient use of the pie-shaped lot, and a façade that isn’t dominated by a garage door. Layered over these requests is the architect’s inclination to create a highly controlled and beautiful entry experience. The building itself consists of 2 (roughly) rectangular volumes that are connected by a glazed hallway.

The public spaces are all contained in the single-floor eastern volume, while the 2-story western volume houses the private portions of the program. The large cantilever places program to the extents of the buildable area while still allowing proper vehicular circulation for a side facing garage door. To enter the house one goes through the gate that is under the large expanse of the cantilever and then passes through the first courtyard that is just behind the front concrete wall.

The actual entry door is in the hallway that connects the volumes and divides the courtyards. This hallway exists in a somewhat ambiguous state between interior and exterior space as its materiality and ceiling plane is continuous with that of the covered exterior spaces that are adjacent to both courtyards. Once inside, one passes between the two courtyards before entering the large volume of the living space.