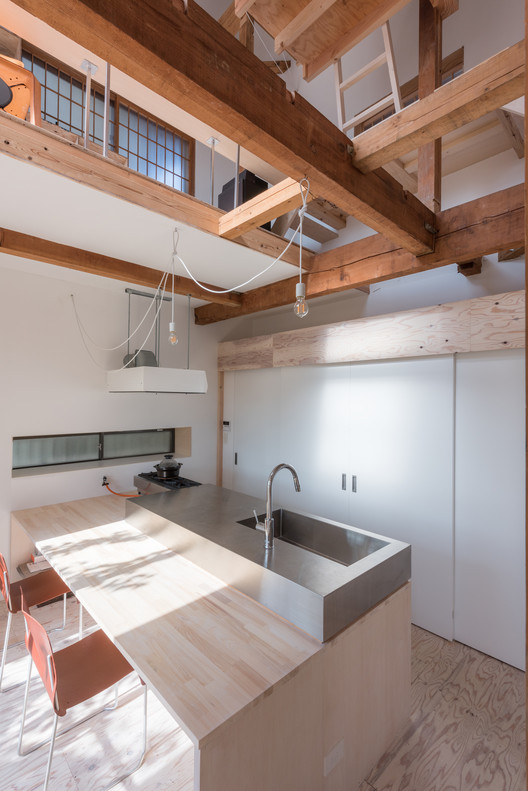 Text description provided by the architects. This is a remodeling of a wooden house in an ordinary dense residential area in Tsurugashima, Kanto region. It was built 33 years ago on a backland site that connects to the road via access of only 2 meters wide. Before remodeling, it had a small bright garden on the south side. There was a field in the neighboring land that faces the garden, where open sky could be seen. However, it was planned to be remodeled for residential development. Therefore it could be imagined that it would turn to a garden surrounded by houses, which is never a good environment.

The plan of this house consists of a combination of remodeling and extension. In the original plan the house was modeled with separate living, kitchen and dining rooms. Since this had a closed atmosphere, we changed the plan and remodel the house with an open atmosphere. Shareable rooms such as a living room and a dining room now have open ceilings with a vertical expanses of space, where a working space and a loft were made. In addition, we decided to build a little arbor in the garden. A simple arbor has been built next to the living room in the remodeled house so that it would be consecutive with the living room spatially and visually.

The roof of the arbor is made of permeable material so that it can catch small light and then spread it. In the middle of summer, the arbor softens the intense sunlight like a lighting cover, creating proper brightness. It also plays a role of a window treatment so that the inside of the house cannot be seen by neighbors. If you open the windows of the living room, making the arbor consecutive with the space, it will expand its function as a living room. The arbor will become a part of the living room, where you can enjoy reading books, eating meals and playing with your dog. It can also be used as a smoking room, a relaxing space which you can use every day.

The small arbor has changed the garden, becoming an important existence that influences the whole house.