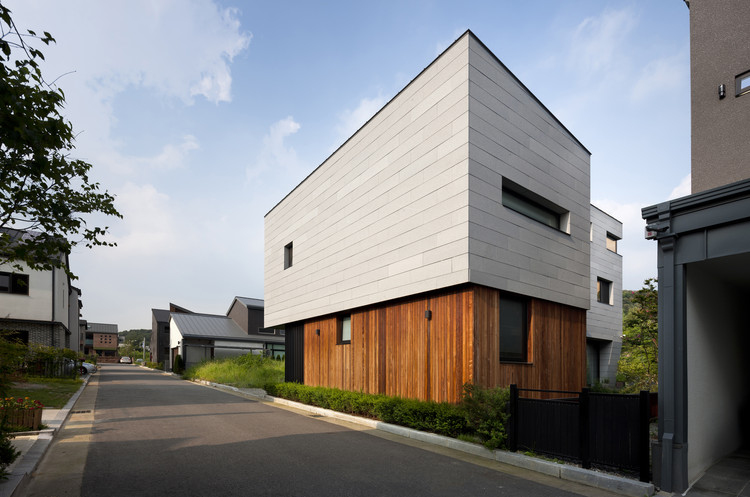 Text description provided by the architects. The site has somehow constrained conditions that lands are adjacent at the north and south, and the main road and the apartment complex over a buffer green exist on the east side.

The house was planned to associate with the couple client in their 50s who have a grown-up kid and become friendly. Also, the house provides a privacy, communicates with the outdoor space and brings the light deep into the house.

On the site where three sides of the land are surrounded by adjacent houses, the house was arranged with the ‘L’-shape making the garden open toward the southeast side where the buffer green zone exists. The living room and the kitchen on the first floor are pushfully open toward the garden in order to be seen as a wide and bright space as the center area of the house. The kitchen area having the different level extends to the outside through the garden deck planned as the same level, and the open staircase supported by one side of the walls makes the living room large.

At the rear garden resulting from the plan of securing a parking lot space, the moving path to the living room and the kitchen was planned. Also, a Toenmaru(recessed Korean Maru) where rain is blocked provides a additional function of the rear garden. The exterior terrace in the second floor was made the inside to be open toward the outside without neighbor’s eyes by letting it deep into the corridor. The attic created by utilizing the high height of the ceiling according to the ordinance of sloping roof application is the workroom of the son whose major is the art. A skylight at the corridor to the attic brings the natural light to the attic and the corridor.

The finishing materials are the Goeungseok(Korean stone) and the Ipe(wood) having a durability. The Goeungseok(stone) was dabbedly finished to show the texture, and the spatial interval was adjusted to emphasize the horizontal pattern. In the first floor where people’s eyes and hand are easily attracted, Ipe(wood) was installed to create a friendly atmosphere. 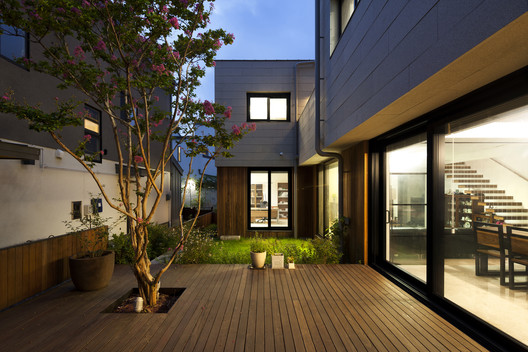