Sasaki has released details of their redevelopment proposal for the Yangtze Riverfront Park in Wuhan, China. Developed in collaboration with OMA and Gensler, Sasaki has drawn on the centuries-old symbiosis between the city and river, leveraging the river’s dynamic flooding to nurture a rich regional ecology and create dynamic recreational experiences.

The endeavor in landscape urbanism seeks to celebrate the river’s spontaneity, and incorporate flooding as an essential element. Stitching together then OMA and Gensler “urban balconies,” a series of microenvironments will host a wide variety of distinct wetland ecosystems, the characters of which evolve throughout the seasons. 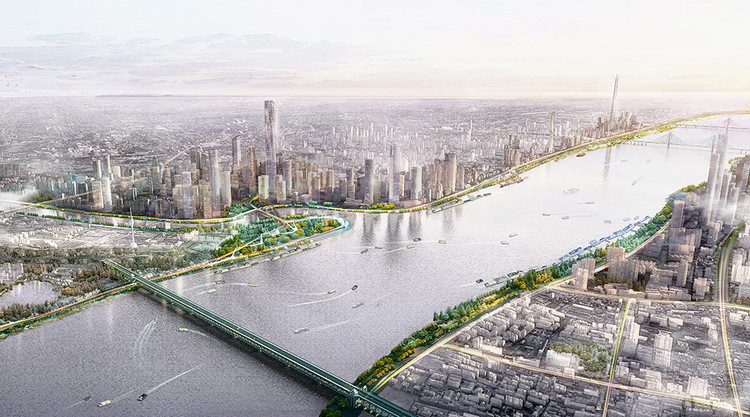 As the longest river in Asia, and draining one-fifth of China’s land area, the Yangtze is revered as the “mother river,” nourishing Chinese culture, history, and economy for thousands of years. Driven by its relationship with the Yangtze for 1800 years, Wuhan has become central China’s largest city, with every significant milestone throughout the city’s history tied to the river. As the city transforms into a hotbed of technology, education, and innovation, Sasaki’s scheme strives to embrace the river following a century of industrial exploitation.

In embracing the waterfront, Sasaki’s scheme taps into the “river culture” of Wuhan, where people frequent riverfront parks even when they are flooded, thus enjoying intimate contact with the water. With strategic dredging and grading, the design creates microenvironments hosting a variety of wetland systems, while nuanced topography and natural water level fluctuations allow for a rich community of plants to grow.

A series of sinuous secondary schemes emerge from the mudflats at mid-high water levels to permit alternative routes for aquatic wildlife, as well as safe corridors for kayaking. During dry months, these stream beds function as informal pathways for visitors to explore. Other recreational spaces are arranged based on careful calculations for dispersing distances for wildlife species, so humans do not intrude on their natural environment. This facilitation of wildlife also includes logs for turtles to loaf on, submerged fish structures, waterfowl nesting platforms, and discreet birding stations.

The rich industrial history of Wuhan is also celebrated, with historic landmarks highlighted throughout the park. Although largely abandoned, the site’s massive railyards and remnants of freight train ferry terminals hold a strong presence, and hence are repurposed for the Sasaki scheme. Vibrant waterfront hubs, cultural and recreational spaces, floating plazas, and a floating community garden all serve to create a uniquely dynamic, active civic area, activating heavy-duty infrastructure.

Where the Yangtze and Han rivers meet, at the iconic “Tip of China,” the Museum of the Yangtze rises among the distinct color divide created by the abrupt clash of the two bodies of water. Sitting among the river levees, the museum offers an uninterrupted panorama of the Wuhan waterfront and burgeoning skyline.

In an effort to democratize the design process, a web-based outreach effort resulted in 65,000 public comments, which were used to inform various design iterations. Local civic groups also organized a series of public meetings and site tours to promote are for the river’s landscape.

News of the scheme follows shortly after Sasaki unveiled proposals for a Panda Reserve in Chengdu, and the Hongkou soccer stadium in Shanghai. 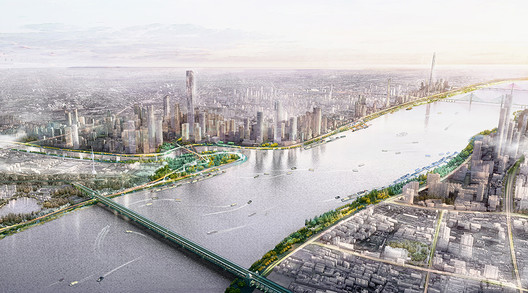