Save
Sasaki Designs a Panda Reserve in Chengdu, China to Aid Wildlife Preservation
Share
Or
Copy

Sasaki has unveiled images of their proposed Chengdu Panda Reserve in China, intended to aid wildlife preservation efforts of the Chinese cultural icon. The masterplan for the reserve represents the launch of “China’s increasing communication, collaboration, and awareness of its pioneering strategies to protect the species and its native habitat.”

With only 1,800 left in the wild, the giant panda is one of the most vulnerable species on earth, and are native to only one region in the world: an area of western China near Chengdu. As one of the fastest-growing cities in the world, Chengdu’s rapid urbanization will yield to a 69-square-kilometer reserve, providing a framework for the protection of endangered species worldwide. 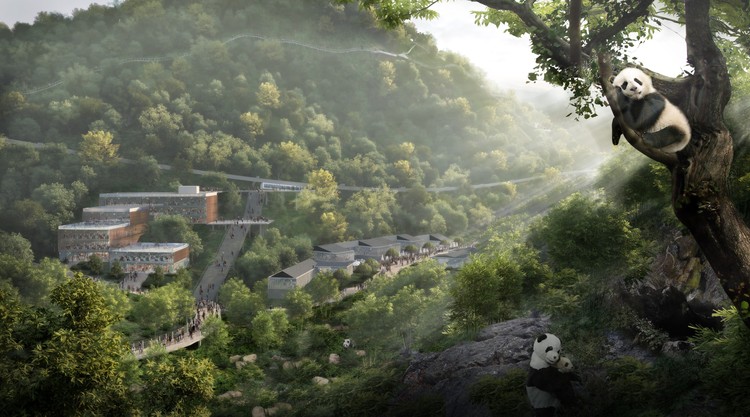 Sasaki’s plan focuses on “conservation, education, and research with the ultimate objective of improving [the pandas’] ability to thrive in the wild.” The three sites which comprise the reserve are organized by their primary functions, as well as the levels of human interaction and disturbance.

The first site is located near the airport, designed for visitors on a brief stay seeking to catch a glimpse of conservation efforts. Envisioned as a “gateway to the city,” the Longquanshan Panda Village” will provide an overview of the region’s history, food, and wildlife, including the prized native panda.”

The second site, named the “Beihu Panda Park,” build upon the existing visitor experience by providing an urban education center for those seeking a more immersive experience. Linked to the city by public transit, the area will introduce the 20 million annual visitors to the daily lives of the pandas, their habitat, and ongoing research efforts to protect them.

The third and most remote area, named the Dujiangyan Panda Wilderness, focuses on breeding techniques and assimilation into the wild. Research will focus on pre-release training “to acclimate juvenile pandas born in captivity prior to final release into the wild.

The city needs the panda and the panda needs the city. The reserve creates a series of destinations around Chengdu which increase public awareness of the giant panda, educates about its habitat, and highlights ongoing research efforts to protect this complex ecosystem. Our plan reconciles Chengdu’s urbanization with a conservation strategy for the panda, providing a sustainable framework to allow both to thrive.
-Michael Grove, Principal, Sasaki 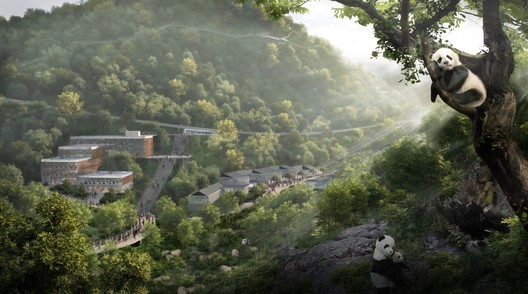