Ateliers Jean Nouvel has collaborated with French practice OXO Architectes on a competition-winning design for a mountainous campus in the Sophia Antipolis technology park in Antibes, France. The “Ecotone Antibes” will serve as the main entrance to the technology park, which is home to over 2,000 companies.

Described as a 21st-century campus for France, the 40,000-square-meter mountainous structure is covered in lush vegetation, containing offices, a hotel, amenities, and co-working spaces. The campus, a rare exercise in biomimicry for the South of France, sought to capture the site’s rich landscaped surroundings, translating a natural ethos to the hard, technological campus. 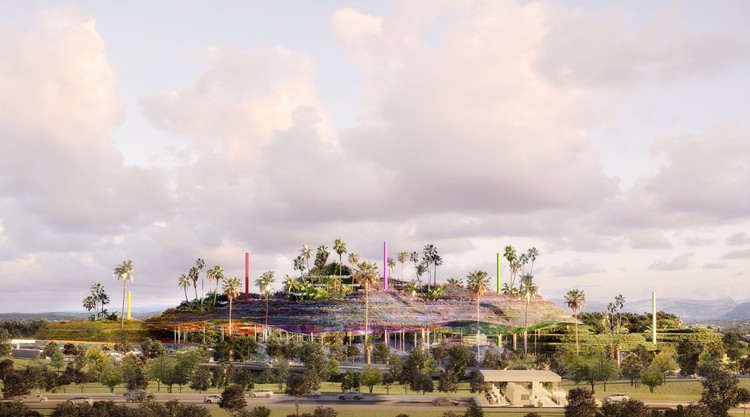 How do we show the place, its hilly contours, its skylines, its trees, its terrain, and not work against these features? How do we create lasting attractiveness? Contextualist architecture, either through contrast or symbiosis, has a duty to answer those questions. How do we live, be, in Antibes, alongside the freeway, before the tollgate? How do we design the architecture so it’s part of the landscape?
-Jean Nouvel

Envisioned by Nouvel as an “ecological campus of the 21st century,” the $50 million scheme creates harmonies between the natural and built environment, with architectural forms and colors echoing the site’s biotope, serving as a welcoming, attractive entrance to the park. This biotope, with input from landscape architect Jean Mus, will be designed with attention to local geographic and historical conditions, adorned with commissioned works from renowned contemporary artists.

Architecture maintains its privilege of creating the heritage of today and of tomorrow, as well as its capacity for generating attractiveness. The architects telling you this have already proved they know how to create poetry and attractiveness. Our client partners, for their part, have demonstrated their conscientiousness in ambitious, realistic projects. But it’s your confidence that will allow us to enrich Antibes through a superb creation that will make ‘Ecotone’, the ecological campus of the 21st century, a testimony to our era that’s visible to all.
-Jean Nouvel

The scheme was developed for Compagnie de Phalsbourg and designed in collaboration with Jean Foussat, and landscape architect Jean Mus.

News of the competition success comes after Jean Nouvel celebrated a series of milestones, with his firm’s 53 West 53rd Street skyscraper topping out in New York City, and his vibrant La Marseillaise being completed in France. 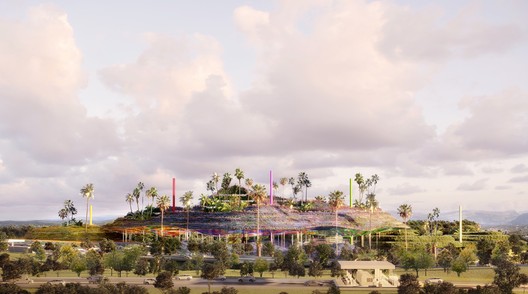