The Jean Nouvel-designed National Museum of Qatar has opened to the public in Doha. The architectural concept for the scheme has been inspired by the desert rose, and seeks to create a dialogue between the fluid, contemporary architectural form of the museum, and the historic objects it will contain. As quoted in a recent press release by Qatar Museums, the scheme will “give a voice to Qatar’s heritage whilst celebrating its future.” The museum opened to a lavish ceremony attended by architect Nouvel, and celebrities such as Victoria Beckham and Johnny Depp. 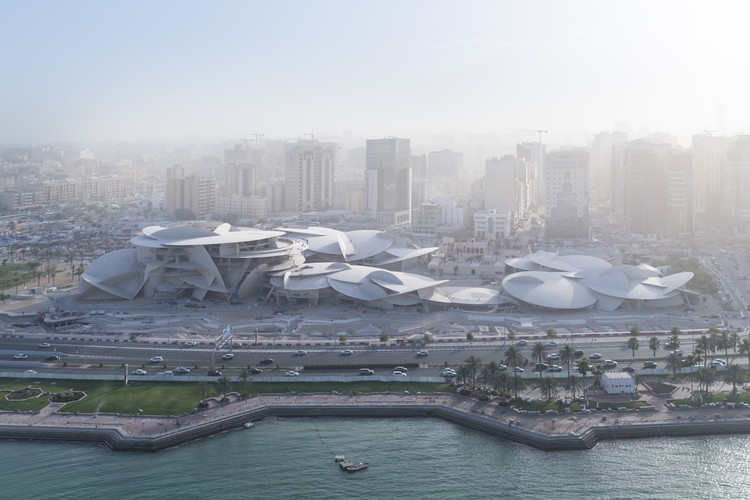 The National Museum of Qatar seeks to redefine the role of cultural institutions, transitioning the visitor from spectator to participant. When complete, the museum will cover 225,000 square feet (21,000 square meters), containing permanent and temporary exhibition galleries, a 220-seat auditorium, a 70-seat forum, a heritage research center, conservation laboratories, collection stores, and offices, as well as catering facilities including two cafes, a restaurant, and a boutique.

The museum has been constructed around the original palace of former Emir of Qatar Sheikh Abdullah bin Jassim Al Thani, one of the most recognizable landmarks in Doha. As a monument to Qatar’s historic way of life, the palace has recently been fully restored as a central exhibit with the new museum opens, furthering a dialogue between past and future.

Central to the museum’s design process was a desire to make the visitor feel immersed in both the desert and sea, strengthening the impact of the historic nomadic artifacts on display. According to Jean Nouvel, the scheme’s interlocking structure, formed of steel, glass and fiber concrete, recalls the “blade-like petal of the desert rose, a mineral formation of crystallized sand found in the briny layer just beneath the desert’s surface."

It will spark an awareness that could only otherwise be encountered, experienced, after months spent in the desert, in pursuit of the particularities that elude our grasp except when the whims of Time and Nature allow… from there you leave for the desert and you return from it bringing back treasures: images that remain forever engraved on your memory.
-Ateliers Jean Nouvel

Editors Note: This article was originally published on 28th April 2018, and has been amended on 28th March 2019 to reflect the museum's opening.