Curated by Maite Borjabad, David Hartt’s Seven Portraits is a portfolio of photographs of seven contemporary buildings across the Americas including renowned projects like the Seattle Library by Rem Koolhaas, the 1111 Lincoln Road by Herzog & de Meuron, Restaurante Mestizo by Smiljan Radic and Residencia Altamira by Rafael Iglesia among others. 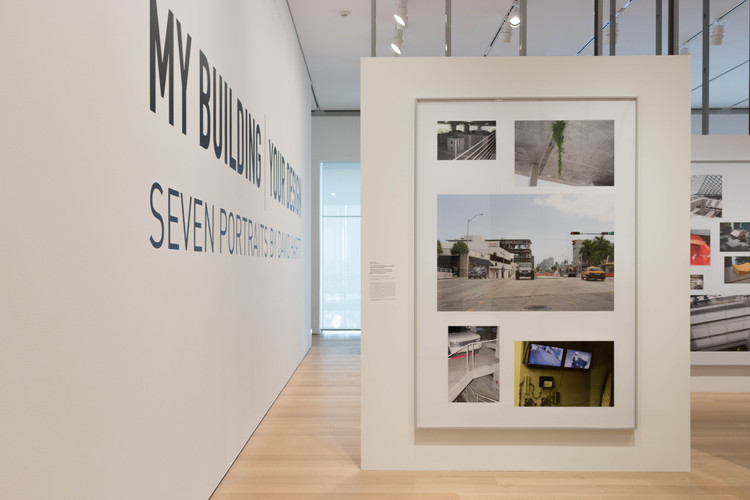 The portfolio was first published as a magazine supplement to celebrate the inaugural Mies Crown Hall Americas Prize, commissioned by the Illinois Institute of Technology College of Architecture in partnership with the architecture and design magazine PIN-UP. Hartt visited the buildings with one of the magazine’s editors. The booklet presented Hartt’s photographs alongside texts and interviews that capture their experiences. As a unique commission for the Art Institute of Chicago, Hartt produced twelve large panels of photographs (including both published and unpublished images), entitled Seven Portraits (Mies Crown Hall Americas Prize, PIN-UP Fall Winter 2014/15 Supplement).

Hartt brings a view of those buildings very emancipated from the architects design predictions and desires, and precisely emphasizes the ordinary and the unexpected – a plant growing in the crack of a deck flooring, what it looks like to open a door, or a building facade becoming the background of a quinicañera’s photoshoot.

My building, Your Design brings together this dichotomy between the projected ambitions of the architects and the daily experiences of those buildings and the cultural and social implications within its most immediate built environment. Thus the exhibition unfolds as two exhibitions in one. Over the white finished side of tall slim walls, the large photographic panels by the artist are displayed accompanied by excerpts of the commentary from the magazine. On the corresponding back side of each of those walls, and exposing its construction, original materials from the different studios reveal each architect’s process and ambitions for each project.

David Hartt biography:
David Hartt (b. 1967, Montréal) is a visual artist who investigates the specificity of place and the cultural and social complexities of the built environment. Recent solo exhibitions have been held at The Art Institute of Chicago; the Graham Foundation, Chicago; LAXART, Los Angeles; and Or Gallery, Vancouver. His work is in the public collections of The Museum of Modern Art, New York; Whitney Museum of American Art, New York; The Studio Museum in Harlem, New York; The Art Institute of Chicago; Museum of Contemporary Art, Chicago; The Museum of Contemporary Photography, Chicago; Henry Art Gallery, Seattle; The National Gallery of Canada, Ottawa; and The Stedelijk Museum, Amsterdam. Additionally, his work has been included in several group exhibitions including Ocean of Images: New Photography 2015 at The Museum of Modern Art, America Is Hard to See at the Whitney Museum of American Art, and Shine a light/Surgir de l’ombre: Canadian Biennial at the National Gallery of Canada. Hartt is the recipient of a 2015 Foundation for Contemporary Art Grant. In 2012 he was named a United States Artists Cruz Fellow and in 2011 he received a Louis Comfort Tiffany Foundation Award. Hartt is represented by Corbett vs. Dempsey, Chicago; David Nolan Gallery, New York; and Galerie Thomas Schulte, Berlin.