Save
Lights, Camera, Architecture!: Where Set Design and Architecture Cross Over
Share
Or
Copy

What do Kanye West and Frank Gehry have in common?

As a first impression, not much. However, they have both engaged on stages with striking design details: the use of exaggerated scale and dimensions to manipulate visual perception, bulky concrete walls and slabs to emphasize heavyweight and grandiosity, visible scaffolding to create an industrial, unfinished feel... Sounds familiar, doesn’t it? 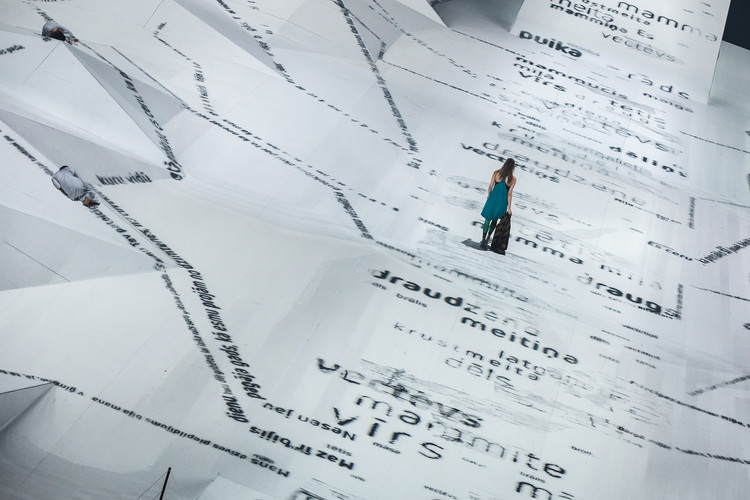 Just like architecture, set design is very prominent, evoking a strong sense of the place, all while working within a limited capacity. The two fields also work within the same constraints - budget, program requirements, and site specificity, and just as acting is a brief depiction of real life, theater sets are the presentation of a snippet of architecture and built environments. Take a look at some fascinating set designs that get the essence of architecture.

Ugly Lies the Bone play tells the story of Jess, an American citizen just returned from Afghanistan, who is about to see that her Florida hometown is not the place she left years ago. To confront her fears, she builds a new world through virtual reality, slowly restoring her relationships, home, and herself. To display this “new world” Es Devlin, a set design heavyweight, created a map of the town made up of 2,000 building models. The miniature replicas, which were applied by hand by the National Theatre Scenic Workshop, protrude from a curved backdrop, making it seem as though the audience is looking through a VR set.

The play's main theme asserts the importance of taking climate change seriously, showing that if we continue to ignore taking responsibility of the future of our planet we will all end up losing our “home”. Designer Chiara Stephenson collaborated with director Caroline Byrne to create a suspended skeletal house frame floating over a lower black oil lake, highlighting the fragility of our planet with global warming, the oil industry, and rising sea levels. The frame, which first appears as a static element, revolves, glows, and changes colors according to the events of the play, becoming a character itself. According to the designer, the frame had two jobs, one is to imply the physical architecture of a house, and the other, to show how fragile “the walls of our house will become if we continue to ignore climate change.”

I think design decisions and aesthetics in theatre need to be more than just decorative. They have to provide significance as subtle or as blunt as that might be depending on the play in hand - Chiara Stephenson

BOTH SIDES - Design by DJA

Latvian architecture office DJA designed BOTH SIDES for the apotheosis of Latvia's centenary celebrations last year. The grand polygonal surface, which was designed as the Latvian flag, was not only symbolic of the nation but as a large performance area, with images, videos and lights projected onto the surfaces. The massive stage - 2000 square meters - was faceted both to create distinct spaces for projection and to provide room for large and small performances alike.

Power, Nuremberg, and Fritz Lang’s “Metropolis” were the keywords that Mark Ravitz used in his creative process of designing David Bowie’s set design. The designer transformed the stage into an urban, dynamic environment, adding color and movement into the rather dull, “grayish” cityscape.

The importance of set design in a concert: The word itself, “set” design lays the groundwork of the visual presentation of the performer. It ‘sets’ visual parameters for style, movement, color, and spectacle - Mark Ravitz

Deutschunde is an adaptation of a well-known book by Siegfried Lenz, which talks about National Socialism in Germany and how people coped with dramatic change after the war. The designer reduced the stage to three walls, all shifting and balancing on one corner - the floors become walls, and vice versa. The protagonists are left with no place to hide and have to fight against the space to prevent stumbling and disappearing.

In my work, I’m always focused on the body and its struggling with systems-abstract architectural forms and the possibilities or obstructions of movement in the space. For me it is important that the stage design doesn’t allege specific places.It leaves space for the viewers’ own imagination - Bettina Pommer

Mark Fisher created a ‘gigabyte city’ for the Rolling Stones as a manifestation of the “information age.” The designers wanted to display the ‘future as seen in the present’ by building large pixelated towers and steel mesh-like backdrop, with an overwhelming cantilevered cobra-shaped structure arching above the band.

Inspired by the concepts of extravagant opera sets, the designers took advantage of the load-bearing qualities of the steel truss structural system and allowed the audience to be situated in balconies in the set design itself.

The main purpose of stage architecture is to give the band the scale and presence that allows them to take command of the stadium environment. We want the audience to experience a spectacle bigger that the individual band members and put them into a theatrical setting that reflects the style, extravagance, and ambitions of the Rolling Stones. - Stufish

She Loves Me - Design by Rockwell Group

The stage design of She Loves Me, a play set in the 1930s in Budapest, is a lavish representation of Art Nouveau architecture. The architecture style, which influenced many buildings in Budapest at the time, extensively used stained glass, organic lines, motifs, and lavish ornamentation. The designers wanted to “use a riot of Art Nouveau details” by creating a colorful urban context with bas-relief buildings, eclectic streets, and exaggerated perspectives. Buildings and architectural elements on stage move downwards and sideways, defining new spaces within the set.