Text description provided by the architects. The project for a “quincho”(*) and garage are located in a property in Los Cardales, a rural town in Buenos Aires province. The building is disposed near a row of pines, over the limit of the northern land boundary, completing the pre-existing delimitation of a central garden that is contained by the house in the front, and virtually bounded in the back and in the southern side by the pool and a grove.

Two pairs of perpendicular walls serve as support for the roof, organizing the interior space as well as courtyards, which are disposed between the new building and the existing house. These reinforced concrete pieces regulate the visuals towards the private areas of the house and frame the perspectives to the garden. The reinforced concrete platforms slightly elevated above the ground, complement the spatial delimitations set by the walls.

The technology of the roof, made entirely out of wood, uses textures and tones to help integrate the edification with the natural surroundings. The structure of eucalyptus laminated beams is organized by a set of longitudinal stringers, disposed of alternately up and down between two transversal beams. This disposition translates in an inverted double-inclined roof, generating an interstitial space between the beams and the ceiling, which softens and colors the light that enters through the higher sides of the roof.

The plywood panels ( of standard dimensions) define the structural module, settle the ceiling and work as support for the roof’s thermal and waterproofing insulation, a continuous cover formed by successive layers of expanded polyurethane and polyurea. The glass patio doors, framed in colored aluminum, are displaced from the edges of the roof, organizing galleries in both sides, mediating between the inside and the outside. These big sliding doors allow integrating the interior with the semi-covered galleries, to unify the whole space under the wooden roof.
(*) A Quincho is a typical South American space designed for social gatherings where the Asado, the traditional Argentinean barbecue, is made and shared by families and friends. 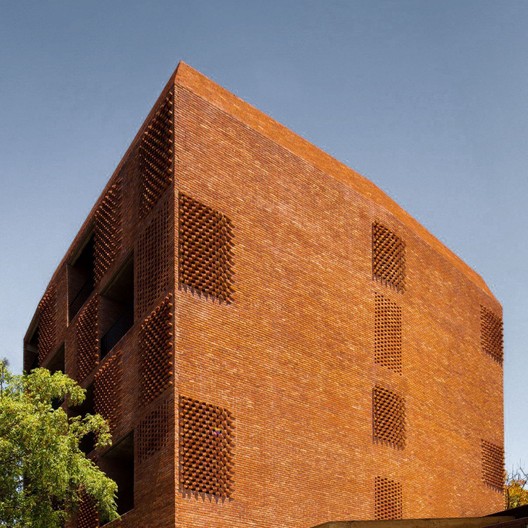