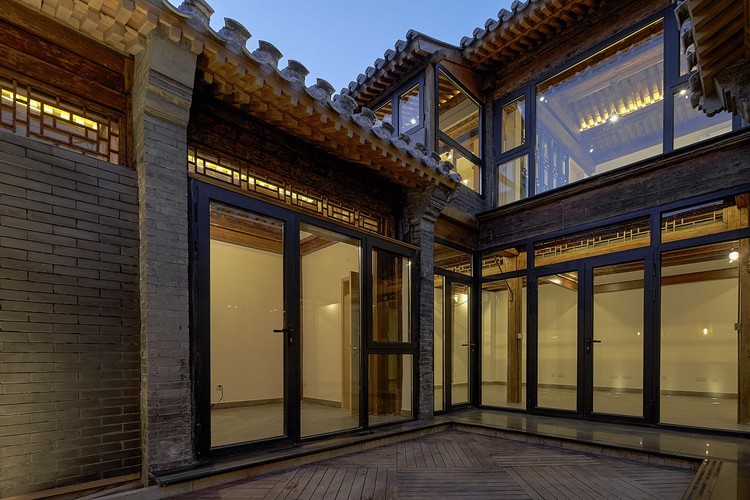 Environment & History:
From the late Qing Dynasty to the Republic of China, Qianmen Street is one of the largest logistics and transportation hubs throughout China, as well as one flourishing commercial center. Full of a variety of shops, the street has brought together huge number of crowds and a wide range of goods always on the move. With the constant revivals and upgrades of Beijing old-city areas in the recent years, all the corners of Qianmen area, including Western Grinding Mill, Xianyukou, Dashilar and Zhengyang Gate have been experiencing a series of important renovations and taking upon their new looks for gradually forming one unique city view better fused and integrated with Chinese traditional elements, colonial eclectic style and modern tastes.

The fact is that courtyard-style villa is one of unique regional residential building types in Qianmen Area, which has better blended with European Eclecticism and traditional dwelling style in northern China for together constituting the city-texture background in Qianmen Commercial District of the old Beijing. The project was located in the long lane, Three-line Alley has 400-meter length and 3-meter width, the north side of Western Grinding Mill Street and extending the southeast of Five-line Alley of Long Lane. In the Ming dynasty, it was called Three-line Alley of Long Lane, Large number of clubhouses have ever been widely scattered in this alley.

After a series of careful renovations, the partial houses surrounding have changed the old faces for being beautiful windows of displaying local fashions and cultures. However, a considerable number of old houses have still remained dilapidated and beat-up. And before that, one two-storey Qing Dynasty quadrangle has ever been seen hidden in the old houses therein.

Original House and Change:
The original house is made up of main room with two-story and three- bay width, and east and west compartments with single-story and double-bay width, and forms a square courtyard together with the south-facing courtyard wall. The house is made up of the old wooden frame and brick wall enclosing support structure, which basically adopted the courtyard layout of the Qing Dynasty and retained the original wood structure. The small partition inside the original building has been reconstructed into a flexible space.

A steel staircase is added to the adjacent position between the west wing and the main room, and a rain shelter without enclosure is added, so that the old and new functional sequences from the first to the second floors are connected vertically and grafted into a courtyard with a three-dimensional compound connected inside and outside. The natural lighting and ventilation of the whole are promoted by the local addition of outer windows and day lighting chambers. At the same time, it expands the number of toilet, which not only meets the demand of office use, but also reserves sufficient conditions for the later residence.

Concept and Realization:
The reform is designed to be simple and restrained in the handling of internal space materials: the original main structure is strengthened by the steel structure with good toughness and high strength, and the wooden frame structure is carefully retained and exposed to form the combination of the new and the old. After years of change, the old planks were polished out of the inherent wood lines, with the traditional paint process of the large paint technology for the entire space contributed to the quiet and warm elements, showing the old house simple and elegant temperament. Pale yellow natural materials such as Chinese fir and natural stone also continue and emphasize the ancient temperament. The dark metal texture of the broken-bridge aluminum doors and windows adds a delicate modern feeling to the primitive and rugged atmosphere.

City & Dream:
As a communicationto the ancient history, the reform of the existing quadrangle dwellings aims to explore more life ways for purpose of generating more communications with nature in future by means of creatively breaking the old pattern and private-boundary modern spaces, as well as integrating a batch of historical symbolized memories. And the reform can be taken as a new idea to the Beijing city-area refreshing mode. We’re trying to make all the rooms insides closely related to the outside courtyard area for letting light gradually shine upon every corner of this century-old house via wide French windows.

Besides of the serial formation of multiple areas, such as antechamber, lobby, kitchen, guest room, corridor and balcony, the beautiful sunset of Zhengyang Gate which can be overlooked on balcony has also represented the traditional garden-constructing essence. Connecting with the city street, the courtyard entrance has still remained the original city interface. Ascending from the green-stone steps and passing through the renovated porch, the outside noisy rhythm naturally switches into the peaceful and nature-favor garden atmosphere.

While maintaining the respect of the historical context, , it has been constantly examining and exploring the architectural characteristics which have been covered by the historical long river. Through a series of precise spatial cuttings and partitions, it has better reconstructed the relationship between the roofs and the current antechambers, as well as explored the relation between the overall architectual massing and its courtyard area and the counterpart between the present situation and the updated one. 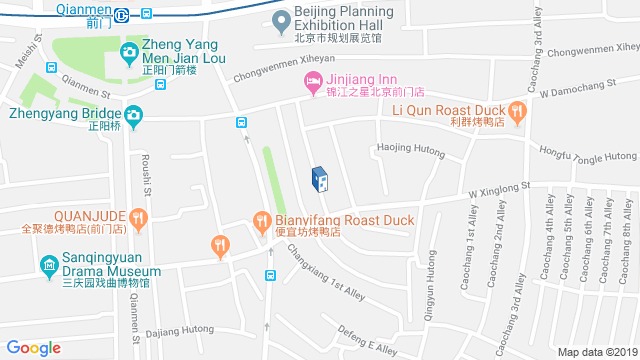 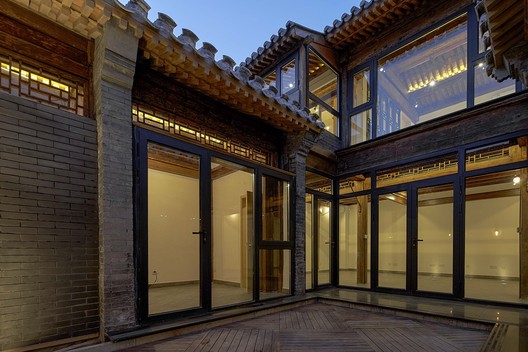