Save
School by the Lagoon / Chinthaka Wickramage associates 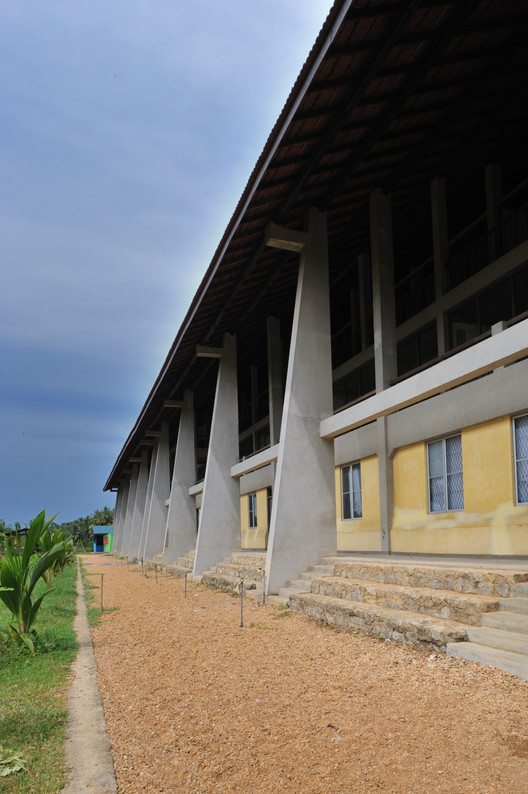 Text description provided by the architects. Two thousand Four (2004)  boxing day tsunami was the worst natural disaster to hit Sri Lanka in living memory. For a country already reeling from a two and a half decade old war the timing of the tsunami could not have been worse. East and South coast of Sri Lanka was totally devastated with 40,000 human causalities in addition to the colossal damage caused to the road network, bridges, harbors, schools etc.

Close to a million people became homeless overnight. Among the buildings destroyed were hundreds of public schools where students of the under privileged sections of the society were enjoying the fruits of free education subsidized by the state. It was one of few ‘social ladders’ available to the poorer sections of the society to climb up the social strata of the country.  Outpouring of aid after the tsunami disaster was overwhelming. An alumni of the Bartleet School of graduate studies , who came as the shelter coordinator of an Irish INGO GOAL  inquired from us whether we are interested in design& supervision to rebuild 21 schools in the worst hit Eastern Ampara district of Sri Lanka.  We jumped at the opportunity to help our motherland at its greatest hour of need.

Surviving students of the school were temporarily housed in makeshift tents built by the GOAL Ireland Irish INGO along the banks of the lagoon while reconstruction of the school  was carried out in close proximity.  In the Eastern Ampara district, minority Tamil and Muslim community lived in almost equal percentages to the majority Sinhalese community. Due to the pickle of this multi ethnic and multi religious composition, the Eastern province it was in the ‘centre of a storm’ of the war ravaging in the country at that time. Out of the twenty four districts of the country, Ampara was one of the most backward, poverty stricken and down trodden districts of Sri Lanka compared with other districts. Most of the surviving students come to school ‘barefoot’ due to the poverty engulfing the society suffering from a long lasting war and natural disasters. Free education was one of the tools used to ‘empower’ these sections of the society.

As the land allocated to reconstruct the school was a reclaimed stretch of land reclaimed along the ‘Karachchi Thona’ lagoon, a thorough soil investigation was carried out as an initial step to identify the bearing capacity of the soil. The resultant soil investigation recommended a method of soil improvement by digging deep and filling the column base footings with coarse sand due to the low bearing capacity of the existing soil. As almost all students have gone through the terrifying experience of facing the tsunami and surviving almost all of them were heavily traumatized.  Task at hand to the architects was providing a ‘sense of security’ through the school building to the students who were severely traumatized and afraid to attend school lying close to a body of water. As a solution the cross section of the school was designed using a ‘step back section’ with each floor stepping back by 5’-0” feet (1.5 meters), so that the whole school will be visible from every nook and corner of the school so that the students feel secure due to the ‘togetherness’ created by this.

The single mono pitched over powering roof encompassing all three levels of the school, creating a triple height corridor veranda on lagoon side and double height passage at the rear road side. The 25 feet by 20 feet (8 meter by 6 meter) classroom blocks were arranged parallel to the lagoon generating narrow linear ‘thin’ section encouraging cross ventilation.

The reservation on the lagoon side and the road reservation on the road side left only a narrow stretch of land to build. Above restriction was taken as an advantage and a one classroom deep ‘thin’ building encouraging through drafts maximizing cross ventilation was designed. Due to poor maintenance of public schools in the state sector, materials used were carefully selected, so that they were long lasting materials with low maintenance. Example in point was the selection of cost effective cement based ‘snowcem’ paints selected as opposed to comparatively expensive emulsion paint  as paint cover so that parents and teachers have to bear minimum cost when painting the school again, since state will not intervene in terms of repairs to the building. Building was designed without gutters and rain water down pipes as maintenance of these items are almost non-existent in public schools, resulting in blocked gutters serving as breeding grounds for dengue mosquitoes. As an alternative a two meter wide (6 feet) ‘spanish shoe drain’ filled with pebble was introduced along front veranda corridor to drain storm and surface water to the nearby ‘karachchi thona’ lagoon.

This unique ‘ step back’ cross section of the building, cantilevering to the rear road side created a triple height verandah corridor on lagoon side and a double height passage at the rear road side which was used  as a pebble court play area for the school children. The whole building plinth was raised by one meter (3’-0” feet) above existing ground level to with-stand a future flood from the lagoon. This raised plinth of the veranda corridor on lagoon side was tiered (stepped) so that school children can sit overlooking the playground which was located between the lagoon and the school building.  The uppermost floor multi-purpose hall serve as a tsunami shelter for the village in case of a future tsunami, with access from rear road side via a sculptural cantilevering staircase. This cantilevered staircase on rear road side was provided as a means of access up-to the 600 people capacity multi- purpose hall to the village community in case of future unforeseen natural disaster.

The all overpowering singular mono pitched lean to roof was clay tiled with a breathable roof tiles, due to its climatic suitability to the hot humid climate of the region. Orientation of the building was done with openings placed along north –South axis with larger openings on lagoon side and smaller openings on rear road side giving a more solid appearance to the rear elevation and more open appearance to the lagoon elevation. Minimal openings were placed on East- West axis.  As the triple height corridor verandah was located on lagoon side the school children enjoy high level of thermal comfort due to high cross ventilation through the building. All classrooms were located facing the lagoon so that each kid will have an uninterrupted view of the lagoon and its surroundings. Positioning of the playground along the lagoon also enhances the ‘view’ the kids get of the lagoon in close proximity to the nature of this traumatized school kids. Cantilevering concrete cube sunshade canopies shade uppermost floor rear side windows giving ample protection from sun and rain, in the process giving an interesting composition and a certain contemporary modern aesthetic to the building. A limited palette of colours were used for the school building in keeping with the colour schemes of most of the public schools of the area with the use of saffron yellow and cement grey. Floors of the classrooms and corridor verandahs were power floated concrete to prevent damage caused due to use of ‘steel legged’ chairs  mostly used in government schools of the ministry of education. 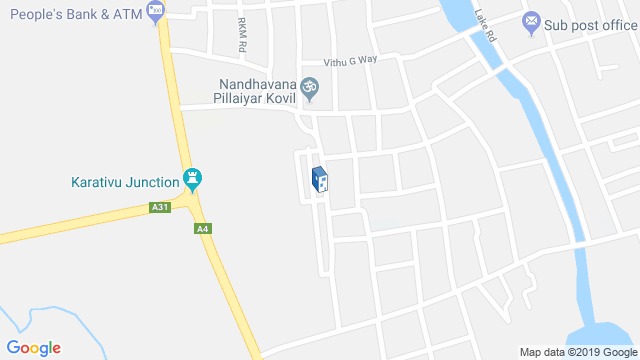 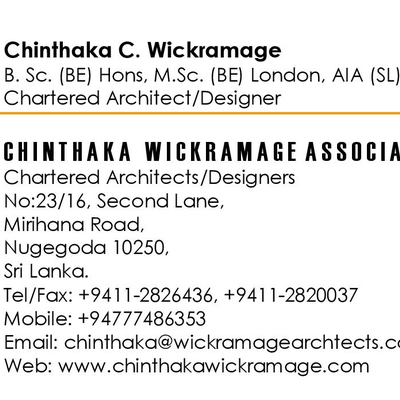