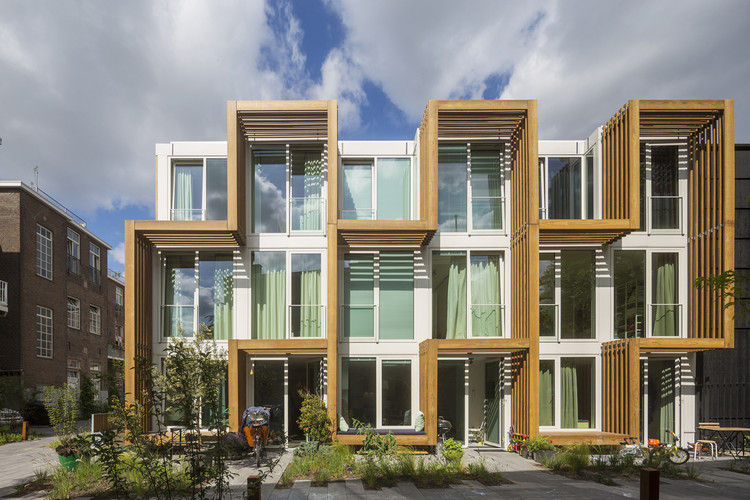 Text description provided by the architects. This project for eight family houses is situated near the Funenpark in the city centre of Amsterdam. The site is a small courtyard, behind a former school building turned into housing. These 8 single family houses are built on the location of a demolished small factory, which was used as a workspace and studio for a media company. The hidden and enclosed space reminds us of the typical Amsterdam courtyards from the middle Ages. The new intimate courtyard is designed together with Hosper Landscape Architecture and the inhabitants of the school. The owners have a small private outside space and the rest is communal space.

With a special eye for scale, material and orientation, the new dwellings are carefully fitted in its context. The facade is pushed back five meters compared to the old outline, to create more distance between the houses and the school.

To increase privacy, we created a ‘hood’: Wooden frames which are placed in front of the façade to mediate between the private and the public realm. They are placed horizontally and vertically. The facade keeps its maximum transparency, while preventing an obliquely insight. Another advantage of this hood is its protection from direct sunlight. It is also possible to grow plants alongside this hood. This will enforce the green character of the courtyard. At groundlevel, these ‘hoods’ provide a little bench in front of your house.

The dwellings have a simple layout. This gave the opportunity for the inhabitants to make adjustments to their liking. All eight houses are unique in layout and interior.

In close collaboration with the owners of the warehouse and the contractor, VINK BOUW, and the inhabitants this plan was developed in a team. 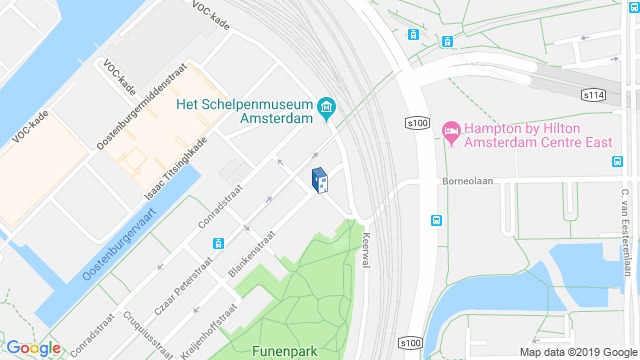