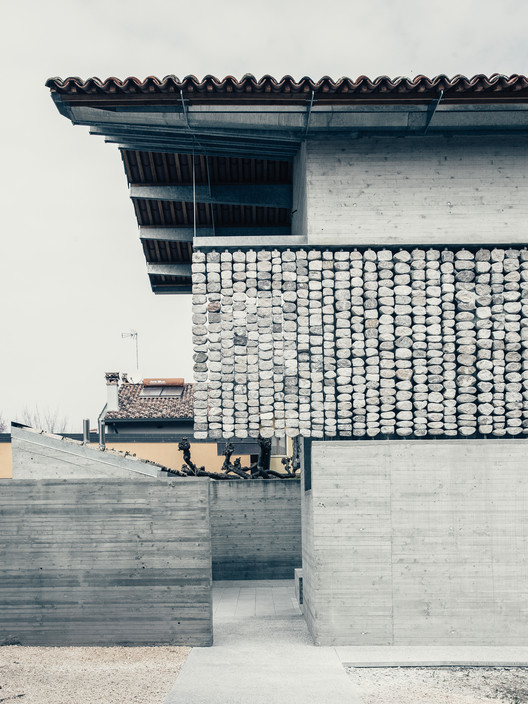 Text description provided by the architects. Redevelopment of an area in the historical centre of San Quirino. Several sort of interventions, from recovery to demolition and reconstruction, investigated the role of materials in the renovation of the historic urban core of small Italian towns. The reinterpretation of the use of traditional stone walls had to deal with their fragility, in a region considered an highly risky seismic area.

The main building of the complex (house 1) has been restructured to create a single family residence, preserving some features of architectural significance: stone walls, an arched portico and a main façade in which the rugged nature of the materials was combined with an harmonious distribution of openings.

The other building (house 2) is the result of the demolition and reconstruction of a barn, whose structure was in critical conditions, and the transformation into a coach-house.

The overall project re-invented with a dose of irony the elements of construction, playing with the building tradition, with the role of materials and with the once established hierarchies.

In the house 1, the original structure was treated as a shell within which creating a new living organism, built up by sliding together box-shaped volumes at different levels to create complex spaces. These boxes of bare reinforced concrete emerge in different ways from the exterior of the building: somewhere they protrude through the original walls, elsewhere they end flush with the stone wall, or occupy part of the portico.

Reconstruction of the house 2 had to follow the rules of the building code, which imposes for all intervention in the historic centers the use of stone in the traditional shapes and formats to prevent the loss of identity of the small rural centers. While the shape of the house is defined by reinforced concrete slabs, traditional stone in reinterpreted in a “cosmetic” use, in this way subverting the hierarchy of the main building.

Both the houses have a concrete structure, (the first as a reinforcement of the old stone walls), which respond to the requirements of an highly risky seismic area.

The buildings are characterized by a highly insulating envelope and low energy consumption systems (heat pumps). The insulating layer is placed on the inner face, finished with drywall or wood panels, that alternate with the colder appearance of the concrete and stone walls.

Light is a fundamental element of these architectures: in the main  building the balance between large openings, small original windows and a skylight above the entrance, enhance the perception of interior spaces and double heights.

In the coach-house, the large openings facing south and west are shielded from the sun by “curtain stones”, which create special lighting effects when the sun goes down.