Text description provided by the architects. In the typical rural landscape environment of the south of the Yangtze River, line+ creates a public space in the scenic spot. Through the dispelling of volume and the rethinking of the materials, the deep involvement of the construction makes the relationship between architecture and the environment an intriguing intimacy. Tradition and modernity, thick and light, dispelling and upright, seem to be pairs of opposite and contradictory words, but they are considered and presented in the same architectural project.

Site and Form
Teahouse in Jiuxing Village is located in Jiande City, Hangzhou, Zhejiang Province. Jiande was a place of Baiyue in ancient times, with a long history, beautiful mountains and rivers and rich with tourism resources. The Jiande government proposed a Global Tourism Development Strategy and planned to invest in creating a theme park in the south of the Yangtze River. The Teahouse in Jiuxing Village was the firstly built public building, which carries the function of reception and leisure.

The site is located at the intersection of three rivers, Fuchun River, Lanjiang and Xin’an River. The river surface is wide; embracing the three rivers, watching Wulong Mountain and the twin towers, rivers and hills add beauty to each other. There are some small villages scattered around the building. The typical features of the building are blue brick white walls, giving a simple and fresh feeling. The shape of the house, whether it is flat, façade or decoration of indoor and outdoor, is obviously similar to the houses in Southern Anhui and North Jiangxi.

The site is located in a cove of the hill, facing directly to the river. Maximizing the landscape interface and integrating the volume into the environment are two basic starting points at the beginning of the design. The program does not pursue a focus-oriented visual image, but presents it in the form of dispelling the volume, and introduces the interest of the mountain to the interior space of the building with a clever dynamic design.

The design used the terrain height difference to divide the two functions of the tea house and the reception into the main and secondary buildings, which were extended to the top of the building, and gradually collapsed, which not only visually weakened the volume of the building, but also produced a terrace place with a big view of first-line Rivers. The main building actually has three floors. In order to ensure a better view of the landscape, the entire building volume is from high to low. The elevation of the top floor is flush with that of the back hill and is connected with the village. The ash space is connected with the waterfront road through the two layers of masonry, which effectively reduces the interference of pedestrians on the use of the space.

The cedar trees along the river and the eucalyptus trees on the slopes serve as sign of the entrance. The circular courtyard is built around the cedar trees. The entrance extends through the walls, spreading the space to the surrounding area, blurring the boundary between architecture and nature. Such a Double Entry design is also a response strategy for architects to ensure flexibility in future use when the owner's function is not clear.

Along the stone masonry slope protection, the building volume is hidden in the cove of the hills. Along the river surface, there are several layers of platforms with wide views. The visitors made turns under the eaves with changing views of rivers and mountain side stair space. And the space is wide and narrow in turn.

Material and construction
Traditional sloping roofs, scattered layouts, rural materials, and wood construction are the habitual choices for architectural creation in the current rural environment. At present, most construction teams in China are more familiar with industrial construction processes and technologies. Due to the lack of craftsmen, the construction cost and time period are difficult to control.

line+'s thinking about materials and forms is synchronous, and there are multiple considerations in choosing concrete to build such a public building in a rural environment. First of all, the concrete material is most consistent with the designer's overall design strategy. As a material with a strong sense of intervention in the natural environment, it can achieve a balance with the overall modest volume strategy of the building; the unique texture of the wood template gives the concrete material a special sense of scale and texture, which can make up for the lack of fun of the single material.

The architect envisions that when the construction activity is over, the lush vegetation gradually climbs to the concrete wall roof in a warm and humid environment. To make the building truly part of the landscape, the long-term fit of the venue must rely on the power of time. This may be another possibility that exists in the landscape style of the south of the Yangtze River landscape in the context of the current call for Native Materials, Traditional Symbols and Orientalism.

The choice of concrete as a molding material is also a test of the depth of construction design and construction. Architects hope to enhance the purity of space through careful handling of structural equipment. Because there is no ceiling, in order to conceal the pipeline and air-conditioning vent, aiming at different parts of the building, three kinds of concrete sandwich wall systems with different thickness, 400 mm, 600 mm and 1000mm, are designed respectively, which correspond to three functions of insulation layer, pipe well and equipment cavity. In order to ensure the continuation of the concept, the architect integrated the interior and landscape design, the lamps, switch panels and wires were pre-buried in advance, and the details of the landscape seat, embedded handrails and drains at the entrance were also overall design.

Construction and implementation
The project started construction in September 2017 and was demolished in August 2018. It lasted for nearly one year. The design work is conducted through the entire construction process. The architect hopes to highlight the relatively strong texture of the material in the large-scale landscape environment. Before formal pouring and after many experiments, carbonized wood boards with clear texture but not high cost were selected as templates. In order to control the construction effect, the final compromised template solution is using the same modulus and staggered assembly. After the construction was completed, the architect deliberately retained some flaws, hoping that the traces of manual construction could be perceived.

From the perspective of formal creation, the Teahouse in Jiuxing Village is always simple and concise, only necessary elements of the building such as plates, columns, shear walls, and so on. But from the technical point of view, it is complicated. It realizes the integrated design of equipment, interior and landscape. Through the borrowing of the terrain, the close-to-finish teahouse is nestled in the foothills of the Fuchun River. The contrasts of thin and far-reaching pick-up and the rough and heavy concrete, under the reconciliation, people on site have been frequently moved. 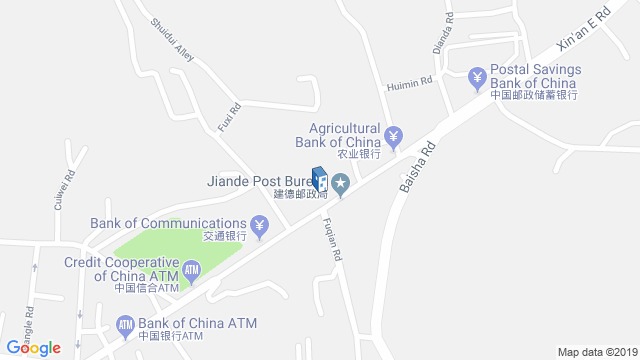 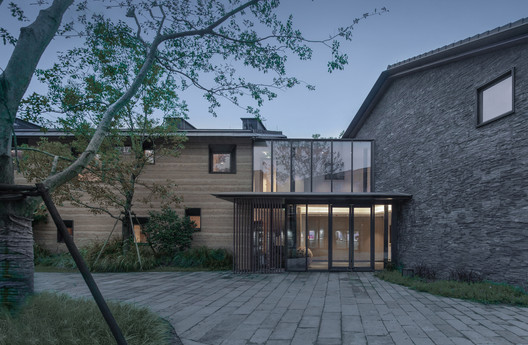