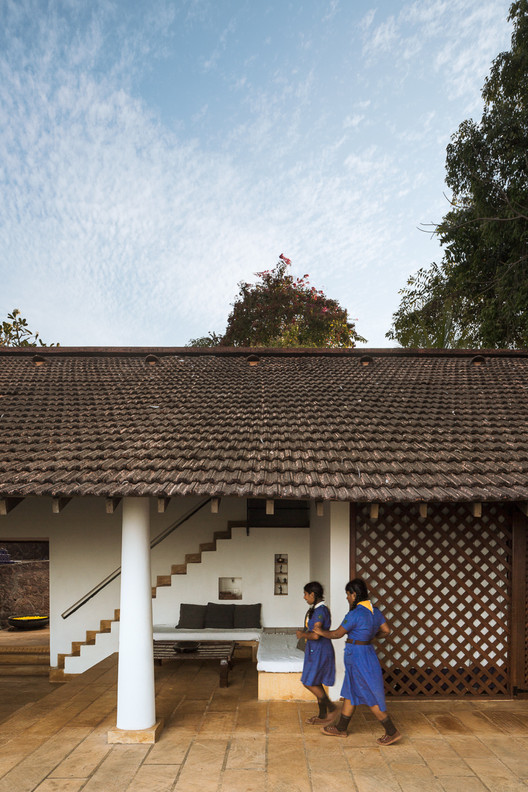 Text description provided by the architects. In the old Portuguese colony Goa, India, architect Mette Lange has designed a house for her family, after spending almost 10 years traveling and studying the local architecture in Goa. It includes traditions for atrium courtyards and large loggias covered by big beautiful low tiled roofs which give shade for the sun and shelter for the heavy rains. The local houses are often built with bricks, made out of the local red laterite stone - the same color as the red soil of Goa. Lange has in Kiranpani worked with the traditions, but simplified it and put it together differently.

The house in Goa is called Kiranpani, which means ray of water, because there is a spring at the foot of the mountain from which the house gets it water supply. Kiranpani is located on the hill, approximately 40m above the river Teracol. From a distance the house looks like a classic larger Goan house.

The house is carefully placed after the existing terrain and with a desire to preserve the large trees, that also provide shade and keep the soil in place. One enters the property from the road which is above the house. The house is invisible from the road, as it sets on a lower level behind the jungle vegetation and the smaller buildings. One walks down in a circular motion depending a stairway to a very large enclosed wall of laterite stone with very few openings in stained glass - also a reference to local Goan architecture. To the right of the entrance Lange has plantet a Frangi Pant tree that casts beautiful shadows on the great wall during the afternoon and drops white flowers in front of the main door. One enters the house via a bridge, placed above a large gutter for the monsoon water made out of sanstone. The bridge leads onto a platform covered by a large tiled roof. When entering the house one experiences the shift from heat to cold and from dust to jungle, but also a magnificent view over the river with the mountains in the distance and the mangrove at the end of the slope.

The big covered platform is the house. It has a very sharp, simple and conceptual plan and section with a number of storage rooms along the great wall, connecting to the bedrooms and the kitchen, but also functioning as stabiliser so that steel could be avoided in the masonry of the great wall. The bedrooms are semi-closed wooden walls, also based on local building customs and they enable natural ventilation. The warm but rustic materials work as a way of softening the sharp and simple lines of the house, and creates a lively atmosphere. The floors are made of a golden sandstone from Jaisalmer, a stone that gets more and more golden with time, and nearly shines where it is used the most.