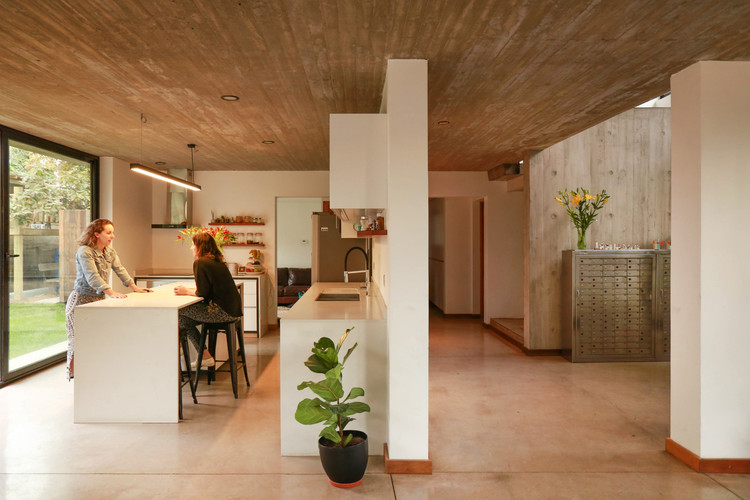 Text description provided by the architects. This project is conceived as the refurbishment of a 1959 family house located in a traditional borough of this commune. The house was in good conditions and in its original state. Therefore, decisions that contributed to honor the house's history were made, both for its volume and the reuse of some of the materials.

The location of the house on a 440m2 land was ideal for using the South wing for the service area and storeroom, while the West and North wings would be used for the kitchen and the living-cum-dining room all in a single continuous space.

The initial concept was to combine the ideas and the layout requested by the owners with the existing volumetry, the cladding and layout distribution conditions.

The second floor is entirely set up with SIP panels, plus steel profiles reinforcement in some critical spots. The spatial concept for re-distributing the bedroom area is a symmetric scheme, with the lounge area as the body at the center and then bedrooms on both sides.

The double-height access is defined by a skylight that goes throughout the entire section, its function is to provide natural light during the morning and also to generate cross ventilation from the spaces on the first and second floor to the top of the house.

The decision of keeping the larch wood from the original facade, gives us the opportunity to think of the windows as slim elements that contrast with the rusticity of the cladding. This is how black aluminum profiles, which in some cases a "hidden" profile was used, plus a 5mm metal pre-frame, also in black, made obtaining this effect possible.