Intro
We were deeply shocked the first time when we met the original building. The abandoned 3-storey archaized building stands quietly in the middle of busy urban road/ commercial space in the north and lively Dawang temple/ public plaza along the canal in the south, cutting off any connection in between. The interior was dominated by rough concrete structure and walls added from different time, which block most of the natural light, so the interior was mainly hidden in darkness. There are a series of courtyards in the 2nd and 3rd floor，surprisingly bringing some light in to create some dramatic moments, which is the unexpected highlights of the building.

Reemergence of Order, City in the Building
Symbolic as it is, building archaized buildings and neighborhoods is one of the common ways of symbolizing historical city contexts in contemporary Chinese cities, reflecting the desperation to regain their historical identities during the economic bloom in a fast-food way. Archaized culture is shallow and cheep and incapable of meeting the true functional and atheistic needs during the process of modernity. Dynamic life cannot be reflected in those lifeless spaces, and real spatial quality is often obscured by hollow symbols. As problem-solving, we try to reveal the true qualities of architecture in the city through designing a building in the way of designing a city. By implanting a new circulation/wandering system, urban space is introduced into the interior of the building, allowing for a more direct interaction between the building and the city. At the same time, it creates an order in which the user can gradually let the design grow with us and let the building change over time. Thus an inclusive place that can accommodate a variety of functional needs reappears.

Reemergence of Objects, Conversation between Old and New
1. Cantilevered central axis and ring corridor system
The huge building was cut open. The redundant parts are stripped. The necessary public space system was established. The primary cut was in the central axis. Slabs built in the previous illegal transformation were dismantled, leaving only original beams and the roof, on which three new skylights were introduced to let more natural light in. Thus, a triple-height space that runs through the north and south is created in the center of the building, a floating cantilever mass wrapped by rust iron plates is also is inserted to indicate and emphasize the existence of this space. Then we can introduce the citizens who wander around the canal on the south side into the commercial space on the north side and our building, and introduce the residents on the north side to the Dawang Temple and the canal. Through this ceremonial path, the perception of the building has been greatly enhanced, and the urban conflicts between the North and South has been digested and relaxed into a comfortable experience. The original building, the previously added concrete skeleton, the new skylights and stainless-steel curtain wall are placed in the same space in a mutually respectful manner, orchestrating a conversation between old and new. The outlets of the building are also wrapped with rust steel plates and stainless-steel plates to form an eye-catching external uniform.

2. Gallery and courtyards
On the second floor, a circular indoor street is introduced, working not only as corridor, but also as Art Gallery. The pavement of the grey terrazzo seems to spread from the rooms, each biting off a piece of space on the street, suggesting a transition of publicity. Many interesting things, such as exhibitions, swings and even fairs, can happen in these "grey spaces". It is also a metaphor for extension of indoor spaces and activities to the urban streets, which sometimes is the city managers’ itch, but contributes quite a lot to the vitality of urban life. A series of courtyards are chained along the circular street as well, working as the most dynamic public node on the circulation, but also producing different spatial combinations and moods combined with the shop spaces. Although the style may not be uniform, it precisely matches the urban concept of our building: the richer and more varied the urban spaces are, the more vibrant the city can be.

The third floor is divided by the central axis roof terrace into two separate office spaces. The open roof terrace is suitable for hosting cocktail parties, outdoor movies, barbecue parties and other activities, waiting for users to discover and create. The terrace arises gradually southward, leading people to the observation deck, where people can over look the Dawang Temple, the canal and the skyline of the city, all together they paint a picture framed by the platform and the canopy in which history meets today, and humanity meets nature. In this contemporary city rich of history resources, a new stage of communication and life re-emerges.

The emergence of texture - the use of materials
Avoid being another one of thousands of archaized building in this city and this country, rust steel plates are used to clad the newly implanted objects to make contrast to the original pitched roof structure with fake grey brick façade, while at the same time this “dynamic" material of rust steel plates will age elegantly along with the original structure. This dramatic relationship between contrast and harmonious coexistence sets tone for the entire project. The central axis is over hanged with such a rust steel plates cladded mass and suspended in the middle of two volumes. Matt stainless-steel plates are used inside the center central axis object to give the huge cantilever volume a uniquely cut inside. Due to the reflective effect of stainless steel, the surrounding environment is faintly reflected on the surface, becoming part of the facade expression.

Unlike the material expression of the façade which emphasize the “weight” floating, in the 3F interior space, Polycarbonate plates are introduced to express the sense of “light” floating, since the space is dominated by rough concrete structure and dark color and we want to make some difference. Openings along the largest courtyard on the third floor are enlarged and framed with green metal panels to bring more light to the interior, and to enhance the dramatic contrast between the floating light objects and heavy original structure.

Reemergence of Life
In the context of the canal, we carefully yet boldly select a variety of materials, trying to establish a dialogue between architecture and nature, between people and the environment, bringing a little sense of ritual, a little bit exquisite, let the place beautiful place re-emerge the beautiful life that was long hidden. 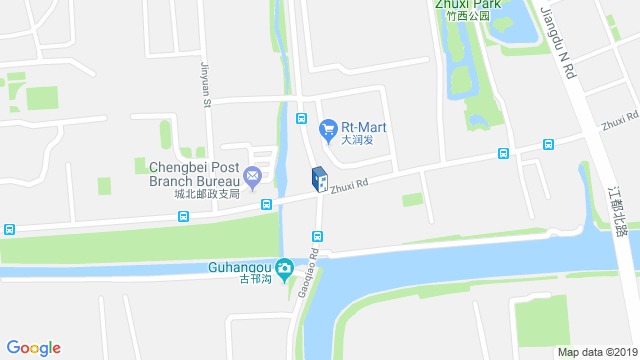 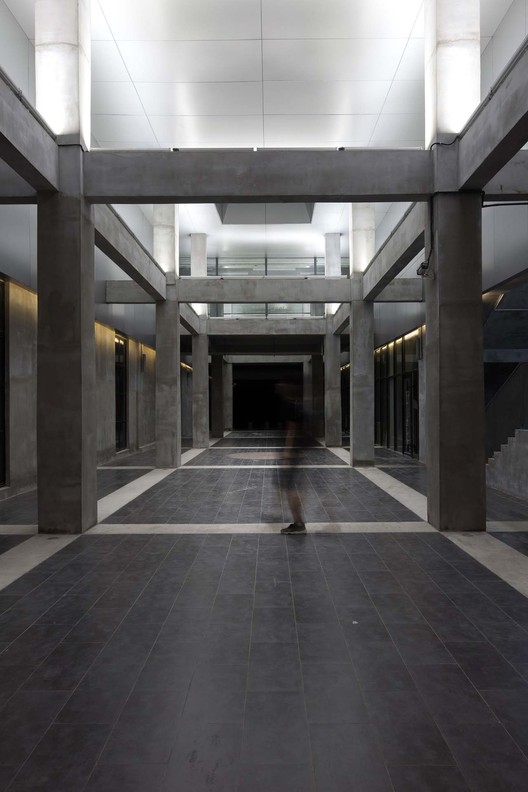