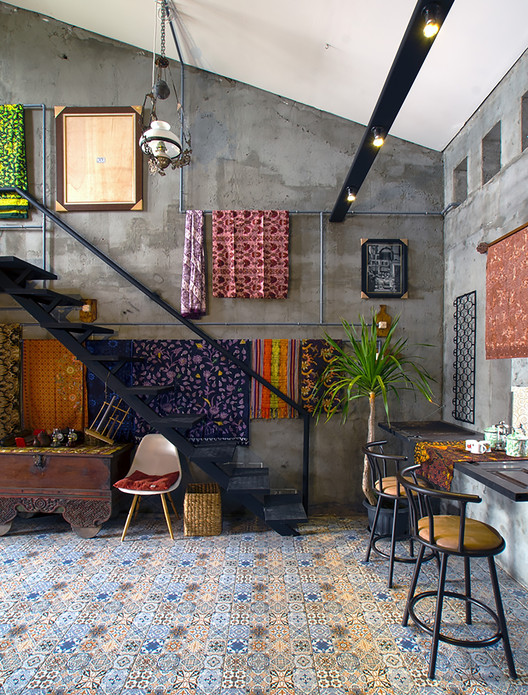 Text description provided by the architects. In Javanese, amoh means obsolete, or broken. So, Omah Amoh means an outdated or damaged house. This is not the actual condition of the house but a parody of architecture to bring us back to basics. This is not only a basic physical architecture but more as an important sense in it. From there, new possibilities that had never been thought of before were created.

This house comes from scrap materials, architect not only practice in designing, but also in design and build. He has scrap building materials (which were not used in the project) that he collected in the warehouse. From these materials, they become "creations" to "created" Omah Amoh. As if to reverse the form follows function  of dogma into a function follows form. The materials turn out to be a surprise: unplanned but it had tremendous impact.

The Javanese base and island houses are communal houses, the rooms are known as public rooms, a gathering place for many people. Built to be more communal than individualistic. Almost all rooms inside can be used as a place to have conversations, discussions, meetings, work on something, craft, or just drink coffee together.

Here, the architect is experimenting with old doors. The door was stripped into a basic character as a "board", so it could be recreated to be anything. This can remain as a door, or be recreated as a table, window and many others. Its conventional function as a door is broken and has a new function that can be said to be a little "subversive".

Besides that, he also thought about the sense of space basically. This is quite experimental. It starts from a conventional room that has to provide enough space for people to move around, so there is a minimalist area that matches the minimum movement standards of people. At the end of his reflection, he found space without spaces, when the front window on the upper floor could be turned into a seat. Interesting space experiments in the midst of limited space in our urban homes today.

The Obsolete House or Omah Amoh in Javanese language, is a conventional “unplanned, but can alter our architectural sense-and-thought" house. By thinking and feeling essentially and out of the box, ultimately he discovers the creativity strength of the materials, from local wisdom and the spaces that are created inside.