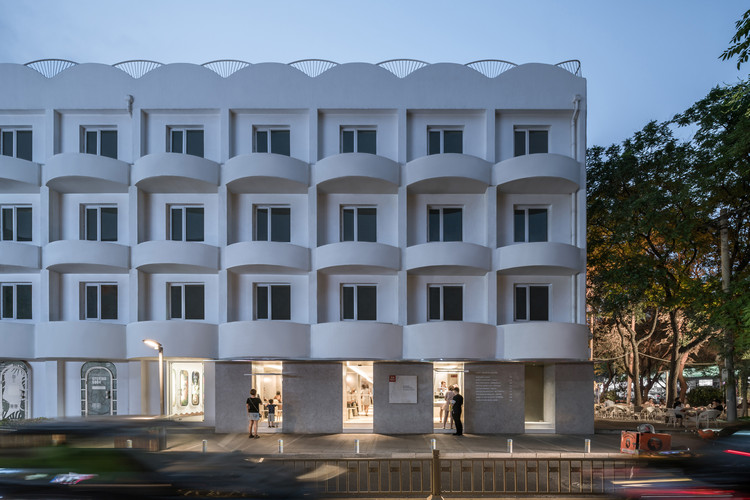 Text description provided by the architects. Anyone who has been to Beijing would know that Sanlitun is an active area popular for its commercial activities. Waves of retail spaces come and go, and a flow of consumers constantly searching for the next talking points. In response to the hustle and bustle, Lukstudio has created a minimal cafe for the yogurt brand LePur,aiming to provide an alternative spot for the hyper-stimulated crowd to take a break.

The site is on the ground level at the corner of a mid-rise building known as the Nali Patio. Its signature façade consists of a series of white round protrusions. Working with the challenge of unchangeable openings along the street, Lukstudio has envisioned a site-specific concept based on the existing pattern of light and shadow.

While the original site is conveyed as a rectangular grey box differentiating from its curvy context, the openings are treated as interstices within the box letting natural light in. The paths of light are further heightened by the use of white surfaces, stratifying the irregular plan into orderly zones.  Each interstice serves a different purpose: a window seater, a shop entrance, a grab 'n' go station and two public entrances to the overall building, while the grey zones embody the cafe functions such as a bar, waiting and seating areas.

To convey the idea of purity related to the meaning of the brand name, the shop is manifested in a restrained palette of colors and materials.  The boxes are cladded in grey terrazzo from the exterior façade to the interior surfaces, while the interstices are expressed in white terrazzo flooring and painted gypsum ceiling. In cases where the “paths of light” run through a table or hit a wall, the demarcation continues through the objects or extends onto the vertical surface.

The cafe is divided into two main sitting areas catering to different visitors. The waiting area and the group seaters at the front provide a relaxed environment for casual meeting; the orderly booth setting at the back room exudes a more solemn atmosphere and is ideal for self-reflection.  Mirrors in pairs are used strategically in both areas, adding a visual dimension to the tight spaces.

At the back room where light is deprived, Lukstudio introduces an array of light on the wall to echo the overall spatial concept. With mirror lining the ends of the room, these thin interstices appear to progress into infinity.  Together with the wooden pews and matching tables, a sense of worship fills the small room. A screen is incorporated at the mirrored wall where videos or messages could contribute to the ambience.

Lukstudio believes that every site has its potential to be special, even one with arigid structure, low ceiling and minimal light exposure. By being mindful to the site characteristics and reverting to the fundamental architectural relationship between mass and light, Lukstudio has revealed the integrity of this location and created a memorable spatial identity for the café. 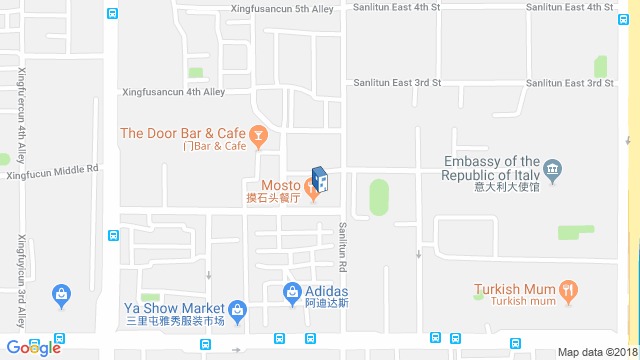 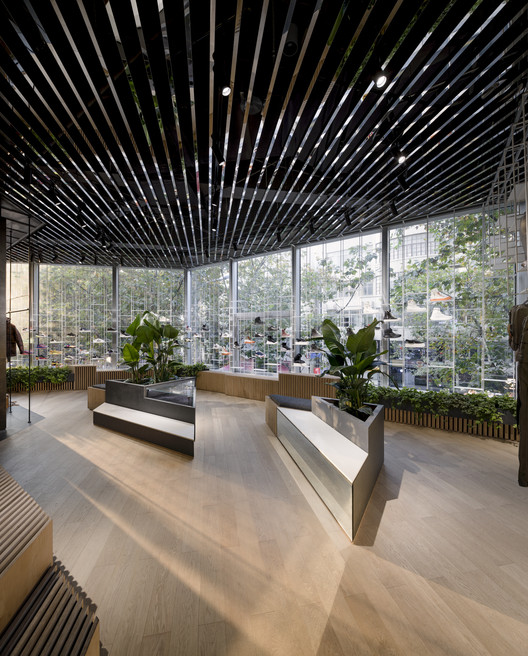 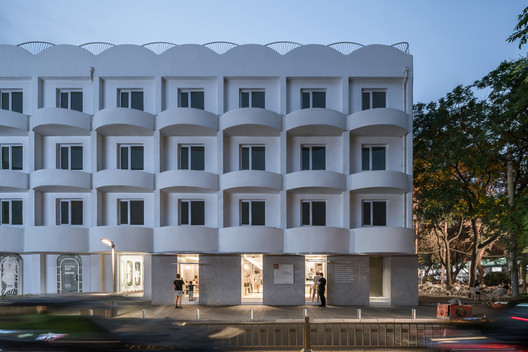