Five years ago, Raw Design, Ferris + Associates and Curio founded the Winter Stations Design Competition to bring innovative design concepts to Toronto’s beaches in the winter months. This year, four designs were selected from hundreds of submissions and will be joined by two student submissions to dot the beachfront alongside vacant lifeguard stations.

The six successful design concepts explore the concept of “migration.” This concept was internalized by each team who generated six unique and original designs that explore contemporary social issues, political issues, and the human condition surrounding “migration.” From their investigations, each team brought a design to the seasonal waterfront, drawing people to the beach and inviting dialogue.

We wanted this year's theme to continue exploring global events while bringing design and spectacle to the water's edge. Winter Stations has always been about bringing joy, warmth, and conversation to the long, cold Canadian winter landscape.
-Roland Rom Colthoff, Raw Design

Below, we have outlined the six winning entries for the 2019 Winter Stations Design Competiton. The pavilions are expected to be built early in the new year. More information is available on the competition's official website here, and from our previous coverage of the annual event.

Designed by Joshua Carel and Adelle York of Boston, “Above the Wall” allows visitors to climb adjoining staircases that connect at the top of a solid wall directly in between. This barrier, constructed around the existing lifeguard stand, is both a physical and symbolic barrier meant to evoke feelings and start a discussion about attempts to strengthen boundaries and physically inhibit individuals from crossing borders. The creators imagined one visitor ascending a staircase on one side of the wall, and another visitor on the other. The act of meeting in the middle is transformed into a psychologically unifying moment.

Created by Tomasz Piotrowski and Lukasz Chaberka, Mind Station provides visitors with the ability to survey the beach landscape from a new position. Once guests gather together inside the pavilion’s wall, each individual is able to stand on a circular pedestal and insert their head through the circular holes in the pavilion’s roof. While the body remains underneath the platform, the head or soul of the visitor can survey the landscape or interact with the other guests that are having a similar experience in the pavilion.

The Forest of Butterflies

Conceptualized by Luis Enrique Hernandez, The Forest of Butterflies represents a specific forest in Michoacan, Mexico. Each year the monarch butterfly migrates to this forest, performing a natural marvel. Many butterflies travel more than 4,000 kilometers from Canada to the Mexican forest. The beach installation is a constellation of CNC cut and assembled panels that mimic the shape of the monarch’s wing.

Designed by John Nguyen, Victor Perez, Anton Skorishchenko, Abubaker Bajaman, and Stephen Seungwon Baik of Toronto, Canada, the Cavalcade installation explores the human quest of life, inner reflection, and social connections with an interactive design that surrounds the masked lifeguard chair at its epicenter. The designers described their artistic intentions, stating, “Cavalcade is an installation that reflects the collective spirit of human movement and transversal. Not just in the contemporary political sense of global migration, but in the consensus that the human quest for a better life is one that is timeless and universal. Cavalcade depicts people migrating towards something better.”

Ground-Squared was created by students at Humber College in Toronto. The installation combines a series of elevated platforms each placed at a different height above the beach’s sandy floor. The experience of traveling from one platform to the next is meant to evoke the journey of migration and its shifting perspectives and fluctuating boundaries. Each platform, differing only marginally in height and beach location, provides a new place of reflection for the users who are encouraged to walk and climb from one geometric plateau to the next.

Intuit, designed by students at Sheridan College, embraces the existing structure of the lifeguard stand by replicating the structure as a physical element that is migrating itself. By manipulating the scale, position, and direction of the stand, the installation causes visitors to examine patterns in placement and location - exploding the familiar.

Eight "Winter Stations" have been installed along Toronto's beachfront, injecting new life into the shoreline during the Canadian city's winter months. Completed as a result of the annual Winter Stations design competition, the eight projects responded to this year's theme of "Catalyst," which sought installations that "open up the waterfront landscape and reinvent the space for visitors" while considering how materials may be repurposed or reused for future iterations.

Seven winter stations have been erected along Toronto's beaches adding color and refuge to the shoreline during the winter months. Part of the annual Winter Stations design competition, this year's theme was "Freeze/Thaw," which asked participants to respond to "the changing climactic conditions and transitions of the Toronto winter." 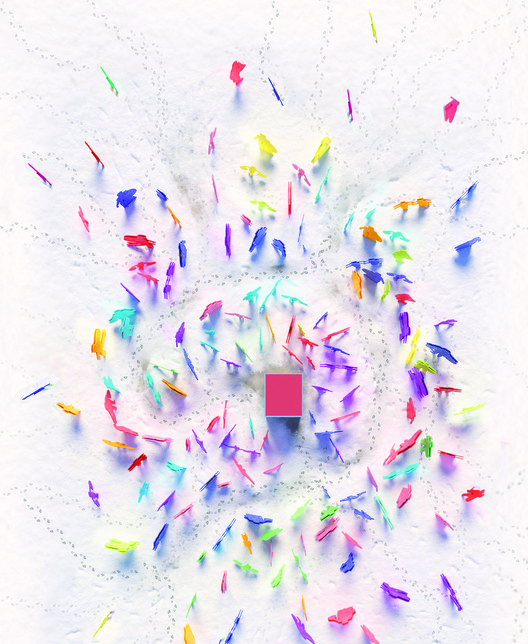