Elon Musk’s Boring Company has unveiled the latest component of their visionary plans for a network of tunnels under Los Angeles. The new “Hawthorne” test tunnel, built at the corner of SpaceX’s parking lot, forms part of Musk’s mission to reduce traffic in cities through a dual system of boring tunnels, and fully electric, autonomous transport to operate within them.

The Los Angeles project ultimately seeks to develop a large, multi-layered network with a loop of highway tunnels seeing cars traveling at 150 miles per hour. While cars will use the superhighways for a small fee, the company will also have a fleet of Teslas operating as public transport.

As reported by Electrek, the demonstration featured a Tesla Model X speeding through the tunnel using a “tracking wheel” system designed to stop the car hitting the side of the tunnel. Musk had originally envisioned a system where vehicles could park on electric skates before being transported through the network. This plan has however been dropped, along with parallel plans for a public transportation system using electric pods.

The tracking system, which Musk claims can be installed as an aftermarket product on cars for $200 to $300, was demonstrated to the press using a Tesla Model X. However, The Boring Company envisions the system being fitted to any electric car in the future. With the tracking system deployed, cars drive on concrete shelves lining both sides of the tunnel achieving a top speed of 150 miles per hour.

Similar to Tesla and SpaceX, the philosophy behind the Boring Company is to radically improve the time and costs needed for such a project, currently totally over $1 billion and 3-6 months per mile. As a statement of intent, Musk claims his 1.15-mile “Hawthorne” tunnel cost only $10 million, with other efficiency measures still to be implemented.

As well as refining the efficiency of laying the concrete shelf system, the company is also using lessons from the construction of its first tunnel to work on its next-generation boring machine. Musk’s ultimate aim is to increase the power of his machines by a factor of 3. He also committed to increasing the speed and efficiency of existing machines by a factor of 15, pointing to the fact that existing companies spend only 10 minutes per hour mining due to the need to reinforce tunnels and remove dirt. As well as saving time, Musk seeks to cut 15% off the cost of tunnel boring by streamlining the dirt removal process.

Previously, he floated the idea of using the dirt to make bricks, which could be sold for 10 cents per unit, or offered for free to build affordable housing. To showcase the proposal’s viability, yesterday’s launch event included the display of a full-size brick watchtower made from dirt extracted during the tunnel’s construction.

Learn more about the Boring Company on their website, here. 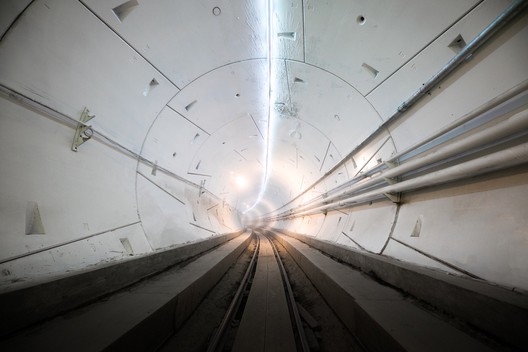