Perkins + Will have revealed a design for an open-air museum along the Crenshaw light-rail line in Los Angeles. Dubbed Destination Crenshaw, the project will run 1.1 miles and feature outdoor art and cultural spaces that celebrate black thinkers, activists, and performers of Los Angeles. Featuring works of public art as well as streetscape upgrades by Studio-MLA, the design was conceived as a response to Metro’s decision to put a section of the Crenshaw/LAX Line at ground level.

Running along Crenshaw Boulevard between 48th and 60th streets, Destination Crenshaw is designed so that the Crenshaw Line’s Hyde Park station and the at-grade portion of the rail line will have views of all the artwork and upgrades. “Everything that we build is simply a backdrop to the innovative, artistic spirit that is alive and thriving here in the Crenshaw district", said Zena Howard, principal at Perkins + Will. Curbed LA reports that the outdoor art gallery will include a new public amphitheater with a raised overlook, 11 new pocket parks and parklets.

Destination Crenshaw be the first outdoor project of its kind in LA, using an iconic street as a backdrop and anchor for public art and streetscape design. Highlighting the unique contributions of African Americans to life in Los Angeles, the project will be a prominent addition along the Metro Crenshaw Line as it carries passengers from Westchester to West Adams, where it will link up with the Expo Line. The concept centers around four nodes with individual themes relevant to South L.A.’s past and present.

Construction on Destination Crenshaw is expected to begin in early 2019. The project aims to open to the public in the spring of 2020 before the Crenshaw Line begins running. 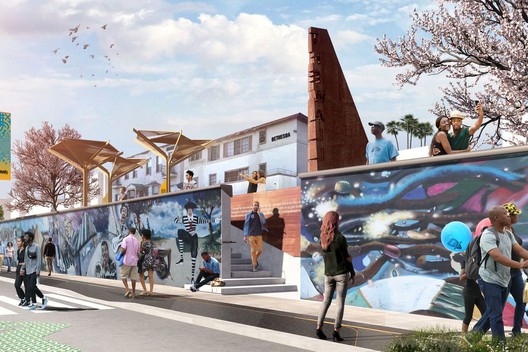