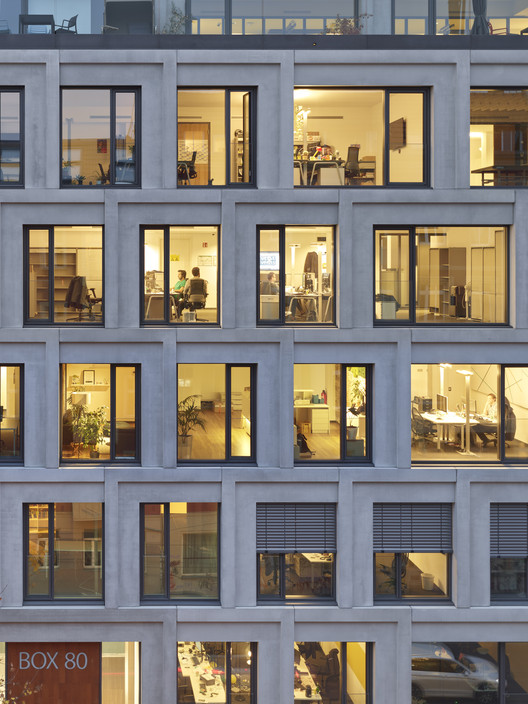 Text description provided by the architects. This new vivid mixed-use urban quarter has been established on a former commercial area in Berlin-Friedrichshain. The ensemble has been developed by four architectural offices on 26.000 square metres. TCHOBAN VOSS Architekten designed two blocks on the Boxhagener Straße. The buildings are part of an ensemble of six volumes surrounding a generous public garden.

Offering residential, retail or medical practice spaces the architectural complex fits into the urban and lively character of the surrounding. As a large-size volume with a dynamic concrete façade the office building on the Boxhagener Straße has a symbolic character and attracts attention of the passersby. Made of bright architectural concrete the prefabricated parts of the façade build a vibrant structure which at the same time remains clear and transparent. The sharp design of the corner windows with continuous glass elements emphasizes this vivid character. The stepped storey allowed the architects to implement large-sized terraces with a wide view over the neighbourhood.

The underground parking goes through the complete building plot. The office building arises on it as a monolithic reinforced concrete construction. The entry sets an accent with a distinctive oak wood gate inside a glass frame. Effectively, the size of the door is smaller and corresponds to the human scale. From here a two-story lobby leads to the offices. Each floor has four office sections, which could be merged if required. Additionally two smaller staircases function as further exploitation and escape routes. While the building has fixed wet cell spaces, the design of the offices can be chosen according to tenants’ wishes – from one-space to open-space.

The building fits the modern demands on cavity floors, chilled ceilings and mechanical ventilation. As the Boxhagener Straße has a lot of traffic the ventilation is ensured by an autonomous system, which doesn’t require opening the triple glazed windows. The building is completely handicapped accessible. 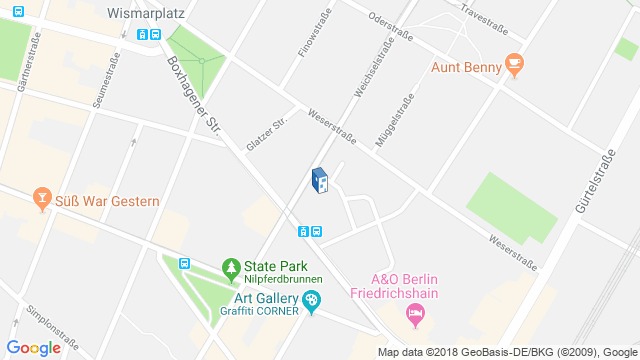 Location to be used only as a reference. It could indicate city/country but not exact address.
Share
Or
Copy
About this office
Tchoban Voss Architekten
Office
•••