Since gaining planning approval from the city last year, the site has been prepared for demolition and reconstruction. The original World Trade Center was built in the 1980s as a rational sequence of gridded blocks of concrete frame and glazed curtain walling. A thorough refurbishment of the four original towers, as well as a substantial extension to the campus, were completed over a decade ago by the design team led by Ron Bakker and Lee Polisano of PLP Architecture. PLP has now returned to the campus to deliver the third major iteration in the history of the Center’s development.

The new intervention is the creation of three linked pavilion buildings to the north-east of the campus, adjacent to a feature 22 story tower facing Beethovenstraat and the south-west corner of Beatrixpark, which in turn has recently been developed as an innovative extension of the business district. Circulation atria connect the new and adjacent buildings, bringing natural light into the deeper floor plates. The character of the first campus extension was defined by a curved glass roof covering a lively internal space, and this will now be extended along the northern edge in a swooping wave along the Strawinskylaan, providing a canopy for the pavilion buildings.

The combination of new and retained building elements will allow a variety of floor plan configurations, fitting many forms of current and evolving workplace types: from co-working spaces and small tenancies to larger multi-story headquarters. The WTC will benefit from several further new amenities: the rooftops of lower structures in the complex will be topped with accessible planted terraces, and the new tower features a roof garden. The WTC event space located on the tower’s top floor will offer panoramic views over Amsterdam’s old town and the Zuidas district. Ron Bakker, Founding Partner at PLP Architecture, said: “We are very pleased to be able to continue our involvement with the life and success of the WTC in Amsterdam, which has contributed much to the development of high-quality urban workplace communities”

Tower Ten is now under construction and will be completed in 2021. 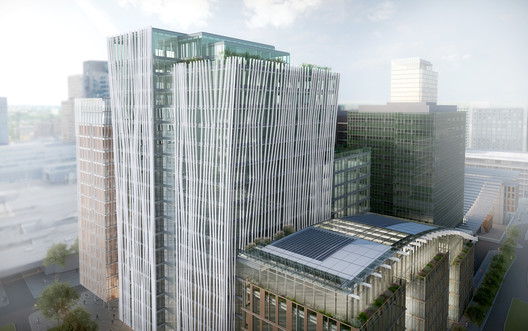