Save
House of the Second Narration / RDMA 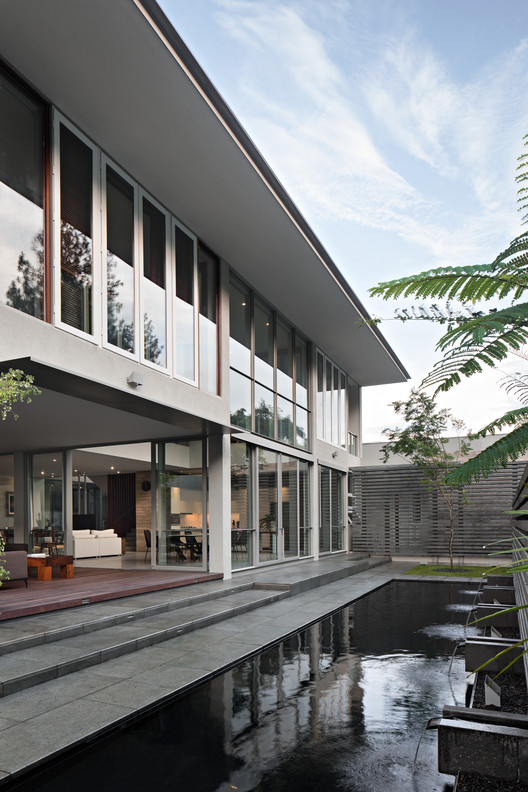 Text description provided by the architects. When you do a half done building that needs recomposing on basically everything in it, then a strategy should be done seamlessly to connect all the given conditions, the problem arose after, the new expectation from the client, first before the new architect give any aesthetic agenda in it.

The project starts with an already erected one storey concrete columns with a later concern from the client in terms of the facade and fengshui. First things first is restructuring the plan to meet the updated fengshui requirement. Then gathering more information on what the client really expected at the first place that doesn’t meet the design. And after that the architect can actually started tuning in.

The notion of a very strong modern tropical looks and massing chosen to connect all the dots above thus resulting a working program and convenient dwelling that actually stand alone in a middle of a newly open housing cluster without a proper shades of trees from the harsh climate especially in dry season of Bandung, Indonesia.

The main facade reflects the needs of the shades by articulating small timber profiles into horizontal louver hiding the master area that obeys the fengshui to be positioned at the higher level of the house and guarding the house as a frontier. The shades are the shields.

The horizontal lines continue inside at a lower level to softly divide services and privates by articulating local stone also into louver allowing view to inspect out and together with the gate and the travertine lines trying to make the building looks more lowed down rather than standing out.

The low horizontal impression even strongly generated inside the gate. Clearly can be seen behind from the farthest point that the building mass broken into two with pilotis arrangement providing large terrace on the lower floor to serve not only the user needs of gathering space but also transitional distance to keep the building skin as far as possible from direct sunlight. The same principle applied upstairs where overhang dominantly mark the needs of the shades joining the same shield expression from the facade, vertically.

Master bedroom speaks the most about the house occupants as it has to reflect their personalities, which are two working couple who keen on simplicity and practicality. Majority of the material palette is arranged to balance the dominance of merbau wooden window, so it can create one harmonious room atmosphere. The unique feature of this master bedroom is the floating TV unit, which provides the ability for the occupant to see the circulation behind it. TV unit in the main bedroom connects the walk-in closet with the lounge / office area. The idea of mini bar is initially requested by the owner to serve some liquor in room without having to step outside. Walk-in closet features unique corner called ‘half clean outfit storage’ to temporarily store outfits that’s planned to be worn again afterwards, so they don’t get mixed up with the clean ones.

Living room presents a big TV unit with sliding panel to give the owner some freedom to play with some possibilities of different look. It also provides some room for personal touch with decorative items.

Kitchen is one of the most fundamental spaces in any house. This one in particular marries the luxury of white matte lacquer panels with the warmth of walnut wood veneer. The details are meant to justify the contemporary feeling, which is made by simple lines and impeccable proportions, creating a totally balanced look for sophisticated, yet discrete luxury.

The whole interior is designed with a deep purpose, a solution that is long lasting and practical, able to guarantee consistent performance, expressing the concept of a project through values that go well beyond the form.