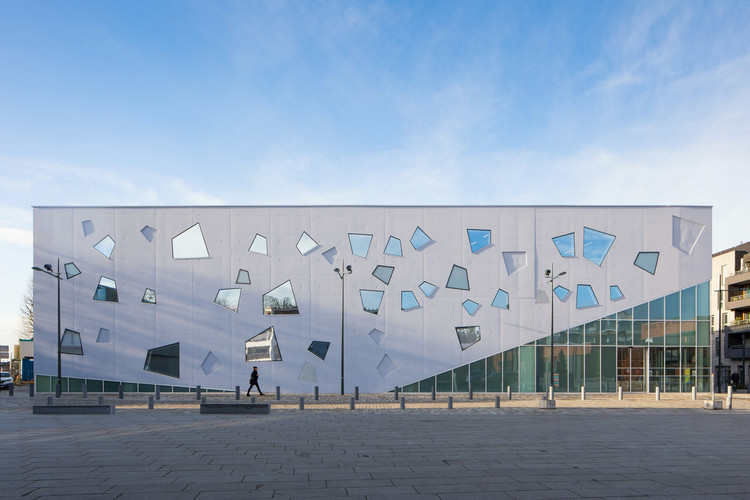 Text description provided by the architects. The town of Mouvaux first created an urban hub where a school, housing units and sports hall were built. A cultural centre was subsequently added, erected on a plot of land conferring optimum visibility and bringing the urban development zone to fruition. The aim of this project was to create a cultural instrument including a performance hall, premises for associations, a venue for symposiums and conferences and workshops for artistic practices such as theatre, music and the visual and plastic arts.

Structured around a fault line
The building occupies the entirety of the plot’s trapezoid footprint and is positioned so at to best benefit from natural sunlight. As a response to the plurality of the design’s functions, it is split in two by a glazed fault line accommodating the entrance lobby. The fault line resembles a ‘covered street’ and is the structural backbone around which the two different universes distributed over the building’s three floors (ground floor and two upper storeys) are organised. The professional performance hall is situated to its left while all other activities are housed to the right, visible from the central public space. The fault line serves, then, at once as a frontier and meeting place, providing an efficient means of circulating through the building and ushering natural light into its very heart.

The poetics of geometry
The grammar of this design is conditioned by the geometry of the plot of land, from which, like a stylistic device, ‘serial’ leitmotifs are born, initiating countless variations, as in the art of Sol LeWitt. Here, the two concrete volumes on either side of the fault line are pierced with glazed trapezoid panels and these motifs are also indented into the building’s blind walls, notably those housing the main performance hall. The conference hall forms a sharp point and the entrance from the forecourt is heralded by a vast glazed triangle.

Hyper-modularity in the performance hall
The tiered seating in the stalls, circle and stage is all retractable, meaning the performance hall may be reconfigured thus:
- capacity with tiered seating unfolded - 500 seats; with tiered seating folded back - 750 standing places.
- a curtain positioned in direct line with the circle means the latter may be hidden from view, thereby reducing the capacity of the hall to 360 seats (stalls only).
- the stage is composed of risers so that it may be lowered into the ground, leaving the stage and stalls on the same level.

An urban beacon
When night falls, the building lights up like a beacon. 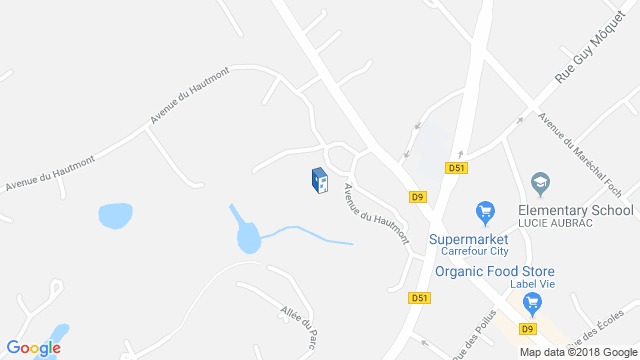 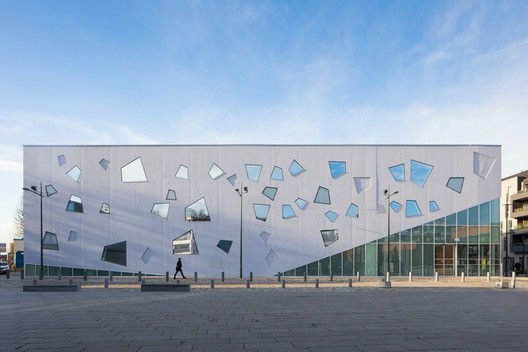