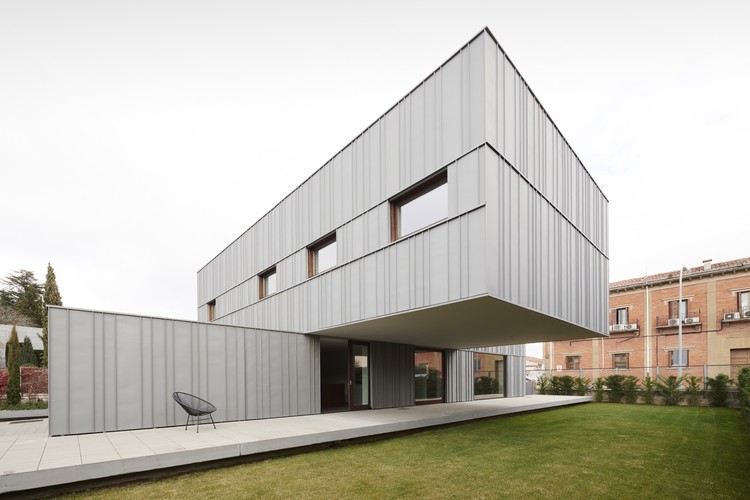 Text description provided by the architects. There was an original project, which was built up to a structural level. It was kept like that, unfinished, as many others. The pre-existence was a very powerful mass of reinforced concrete, characterized by the two facades of the first floor that, acting as beams of great edge, support a generous projection of more than 6 meters. It is also noteworthy the sunken courtyards, which allow the total occupation of the basement, so that much of the living area of the house remains hidden under the ground. On the street level, the aim was to read the completed work as an intersection or twin of two different volumes, with different finishing, on which the lighting holes of the house were punctually drilled.

After ten years an opportunity to finish the work and rethink the project arises. New intentions guide the development of the proposal. Having perceived too many tensions in a plot of tight dimensions, we try to compensate for the disturbing balance of the upper volume in projection by shaping a raised transverse platform that will help, in turn, to bridge the gap between the interior of the house and the garden. This gesture suggests a more rooted settlement of the house on the ground, an idea that can be supported by treating the sunken courtyards as an extension of the facades. These strategies help to highlight the horizontal component. It is proposed, in this way, a composition of superimposed strips, configured by a coating of zinc and wood, which lighten and dissolve the perception of the original masses, provide a homogeneous, monolithic, more serene image, absorb and integrate the different gaps, include the sliding shutters of solar protection and darkening and, moreover, they almost completely dilute the original presence of the two volumes. The same pattern taken into the interior of the house abounds in the intention to perpetuate the leaks and dissolve the boundaries, providing a greater sense of spaciousness.

The apparent sobriety and the exterior secrecy of the house contrasts with a cheerful and bright interior, achieved thanks to the roof skylights and the generosity of the basement spaces.