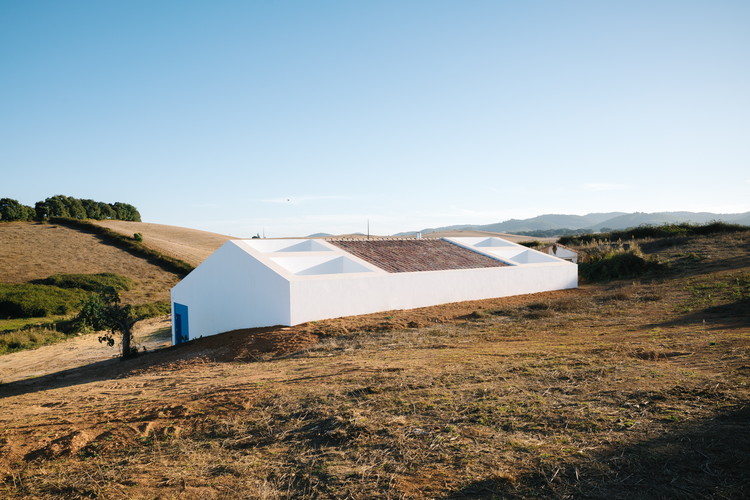 TIME, SPACE AND PLACE
In Cercal  House time and space are not separate dimensions but rather interdependent. There is the time that corresponds to the cycles of nature, the time of who inhabits the place and there is the space that is shaped and influenced by it.

Alentejo – the place where the house is located – is also a challenge. As Miguel Torga says, Alentejo represents “the maximum and the minimum we can aspire to: the wilderness of an infinite dream and the reality of an exhausted soil.”

The Cercal House is thus a proposal that explores the possibilities of a new time and space in a place also marked and altered by the novelty of the house, wishing ultimately to build a renewed commitment between man and landscape.

INTERVENTION STRATEGY
Located on a terrain whose halfpipe morphology is motivated by a water line that crosses it, the house is implanted in one of the slopes that the river divides, next to the remains of an old construction.

The search for the right position  and solar orientation, in parallel with a volumetry  that searches for a skillful dialogue with the slope and also the pursuit of the best visual horizon, synthesize the main intervention strategy guidelines.

In addition, the project sought to meet other principles of which we highlight:
Appeal to the traditional house archetype as a structure tha carries a solid memory and as a support for new formal manipulations and spatial interpretations;
Introduction of patios as light-enhancing element and reflection in the interior, doubling the exterior spaces with a more intimate vocation; Functional program distribution considers the social area as the centre of the house, around wich is organized the remaining program of more restricted acess.

Intensification of the relationship between interior and exterior by extending the roof and projecting a platform that comes from the social area and is topped by a water plan - a tank that builds the platform boundary; Mediation between interior and exterior space through the introduction of a transition space - the porch. This space is reinforced by the introduction of sliding panels that expando r confine the house boundaries and the horizon; The use of local constructive systems and traditional materials reinterpreted in the logic of a contemporary

Prevailing use of white color in walls and floors in contrast to the "Alentejo blue" used in transitory and light elements as the access door to the house. 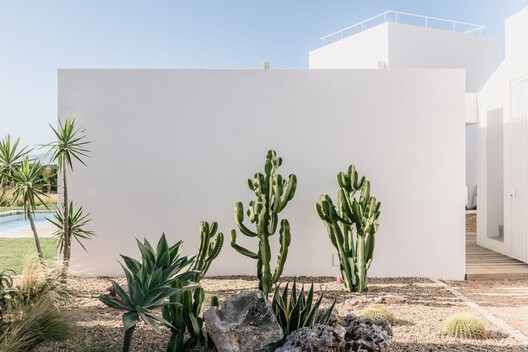 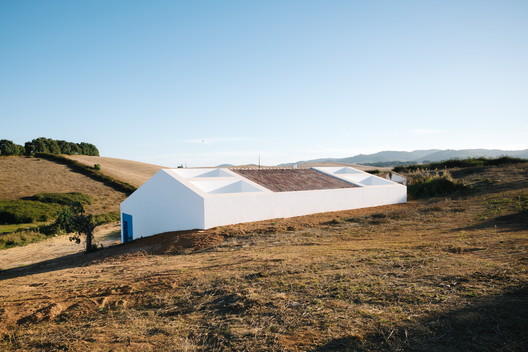