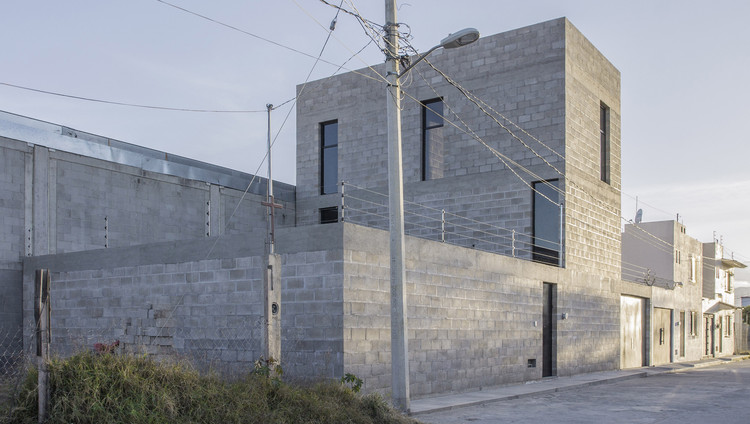 Text description provided by the architects. The house is located in the outskirts of the city of Oaxaca, a developing context, in the middle of changes in land use, where barely more than half are buildings; a combination between houses and large storage units.

The assignment is given with some very clear requests, due to the conditions of its current surroundings it is emphasized for the house to appear unfinished from the outside, to generate an opportunity to have a recreational space inside by using half of the plot of land as a garden; and the possibility for a visual escape through scale towards the view of the city, the Sierra Norte or of the hill of Monte Alban. The plot of land is 20 meters long at the front and 10 meters in depth, the program is developed in a fourth of the available area, an area of five by ten.

From the specific requirement of the desired appearance, of the immediate benchmarks of context and from a personal philosophy of design where tectonics are essential the construction material is chosen; hollow concrete blocks, which due to its characteristics, conditions the space design to modules marked by the construction system, and at the same time allows for the management of the empty spaces in the necessary and specific proportions to vent and illuminate each one of them.

The ventilation openings that serve as windows on the first and second storey are positioned as a consequence of the undesired glances from the neighbors; on the ground storey it is different, seeking to generate the largest connection possible with the garden area through larger and multiple openings.

The functionality of Casa Guadalupe is developed through two main axis, a horizontal one and a vertical one, the first one public and the second one much more private; the first one is a succession of spaces with differentiated uses, garden, communal and service areas, those related to social activities, production and recreation. The second axis corresponds to the development of personal activities and rest, which make use of the most intimate spaces, vertically connected and isolated at the same time.

The project is a spatial intimacy quest, it is a basic volumetric exercise, it is finally drawn as a single element, thought out with the intention of generating the sensation of being a boulder, an inhabitable monolith; sensation achieved by the nature and proportions of the material, rough and imposing, which builds the space through its own scale, completely sensory and tectonic, which reenforces the context´s atmosphere in constant development.

The project defies different design challenges, as well as labor and costs. It is a true accomplishment to have been able to complete it with such a limited budget and inexperienced labour force in the construction system; which is not used in this part of the country to do these types of projects.