Steven Chilton Architects has released details of their proposed Puzzle Ball Theatre in the Huadu District of Guangzhou, China. The 2000-seat spherical scheme is influenced by the ancient art of puzzle balls; “intricately carved sculptural ornaments consisting of several concentric spheres, each freely rotating with the next and traditionally formed from a single block of material.”

The Chilton scheme, along with the original Yue-inspired show it will contain, seeks to evoke the characteristics and qualities of the ancient art, through a spherical massing, asymmetric overlapping patterns, and a complex surface geometry. 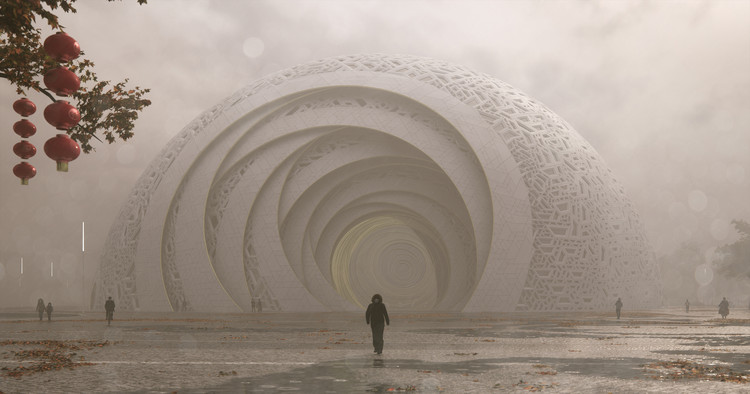 The scheme’s primary structure consists of a twin-layered dome formed of tubular steel members connected to spherical nodes. The spheres are clad in GRC panels, sitting as a rainscreen over a substrate formed of insulated aluminum panels and glazing.

Visitors to the scheme entering via the main entrance are treated to a composition of offset spherical surfaces, creating an asymmetric overlapping pattern reminiscent of puzzle balls. The surface geometry is also inspired by the “geometric patterns found on wooden window shutters originating from the region.”

The eye-catching cladding was designed with a variety of goals. The sizing and placement have been optimized to limit the number of panels needed to cover the sphere, resulting in a reduction in time needed for fabrication. The cladding also seeks to “capture the complexity and differential porosity that is a characteristic of real puzzle balls,” while distributing the complex areas of the façade to maximize their exposure to the public.

These goals were achieved through the creation of a triangular grid based on a geodesic polyhedron, with engineers’ input ensuring it achieved the optimal structural properties. Rhombus and trapezoid-shaped panels were then developed and distributed across the grid over three generations, each one reducing in size from the previous. As the pattern approaches the ground and entrances, the density and complexity of the surface increases.

The size of the opening in each panel is determined by the need for national light and views into the lobby and main entrance while ensuring the façade is as closed as possible in higher parts of the building to avoid unwanted heat gain. The design outcome of these several components, conditions, and desires is a “gentle and gradual variation of solids and void” paying tribute to an intricate aspect of Chinese culture.

News of the scheme comes weeks after Steven Chilton Architects designed a forest of white columns and a latticed metallic roof around the Wuxi Show Theater in China. 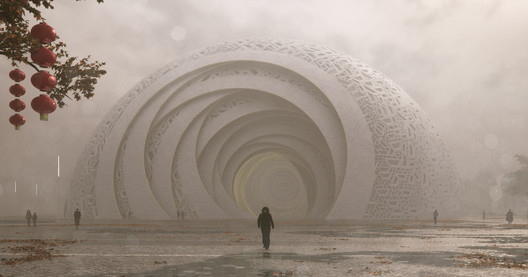