Steven Chilton Architects has designed a forest of white columns and a latticed metallic roof around the Wuxi Show Theater in China. The screen of angled columns surrounding the circular building was inspired by the Sea of Bamboo, a national park with one of the biggest bamboo forests in the country. Opening in December 2019, the design will provide a permanent home for Belgian theatre director Franco Dragone's show, the House of Dancing Water. 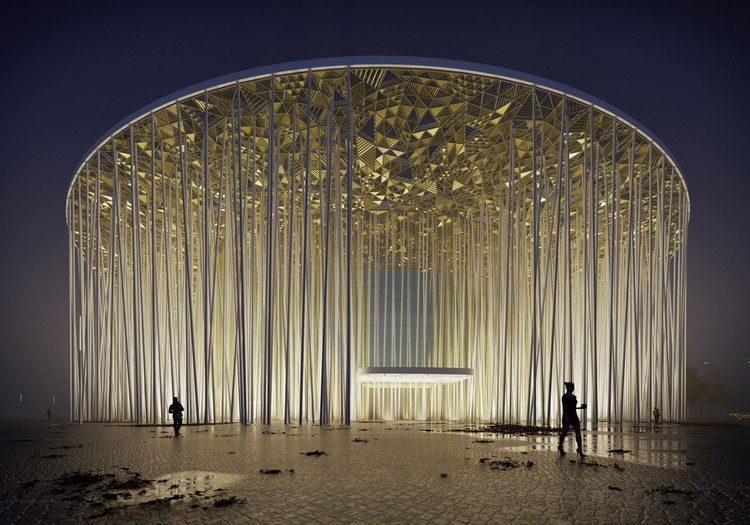 Located close to Lake Taihu in the Jiangsu province of China, the building’s appearance is composed of three primary elements: the columns, the shade canopy and the building envelope. Framing the theater's entrances, the angled columns connect to a canopy of gold anodized aluminium louvers set in the roof above. Conceptually formed as the "leaves" at the top of a bamboo grove, the elegant louver system braces the slender columns tops to transfer the weight to the main building structure. The circular theater is covered in curtain wall glazing that was designed to be fretted with white and gold stripes mirroring the surrounding white columns. At night, the theater will glow and illuminate as light is reflected off the bright surfaces.

The shade canopy wraps around the perimeter of the building at roof level. The canopy's triangular bays are orientated randomly to create an organic quality to the structure and light and shade patterns that fall across the building envelope through the day. Each bay of louvers is also set at different angles to heighten the sense of variation when viewed from different angles. The environmental purpose of the shade canopy and columns are to provide shade over the surface of the façade to passively lower the cooling load on the building. 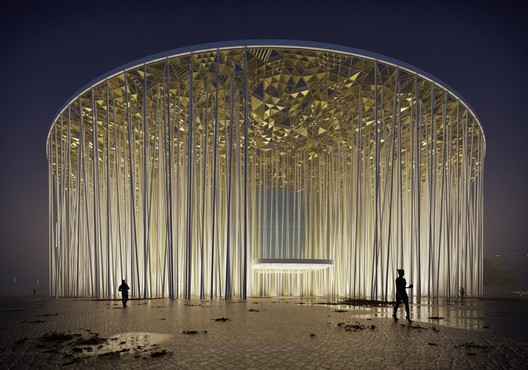