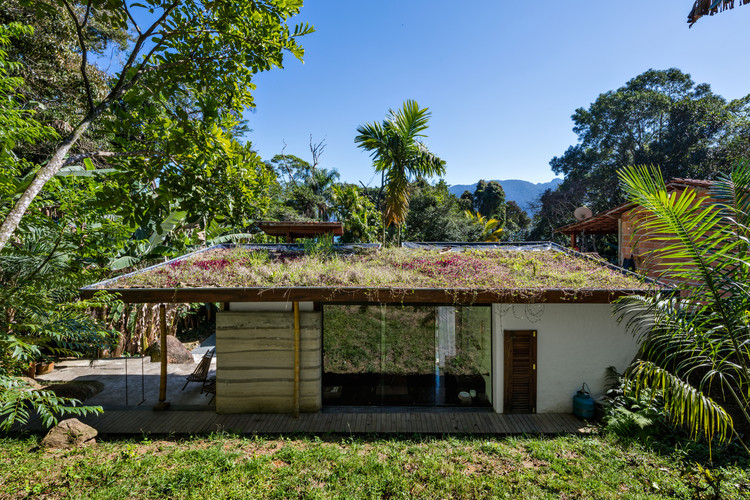 Text description provided by the architects. The clients required a multifunctional guesthouse where family and friends could stay over for a short vacation and the owners could also use it as a separate room to work or for the children to play. One bedroom with double and single bed and a sleeping couch sufficed, the bathroom needed to be comfortable but not too large. As the guesthouse is close to the residents’ house they wanted a soundproof barrier and enough privacy for both residents and guests.

A large stone that was present on site was preferably integrated into the house. The building is made by the cooperants of the social building project of Camburi. The idea of this social building project was to provide training and job-development for a deprived community. After the community center, commissions were sought outside of the village of Camburi in order to have economic return for the cooperants, of which this guesthouse is an example.

The location of the guesthouse is ‘litoral norte’ in Southeast Brazil, with climatic conditions being tropical warm and humid. The guesthouse is less protected by surrounding structures; wind loads are hence higher, enlarging the need for extra roof weight.

This is achieved by a green roof. As the project location was remote from the town center and everything had to be carried to the site by carriers, the principal idea was to use as little construction material as needed by re-using materials and applying natural materials extracted from the site. The 6.3m long rammed earth wall serves as noise barrier and is made with locally excavated red earth. As the terrain lies on a slope, levelling of the terrain was required thereby delivering base material without extra energy needed.

The formwork used for the rammed earth was later on applied in the roof structure. The beams holding the framework together became the ring beam. The green roof was finished with locally found black earth and plants. The large granite rock that was present on the left-side of the terrain was integrated into the bedroom forming half of the wall. Beyond an existing palm tree was cut out of the roof to maintain it.

Bamboo culms were used to form the roof structure. To ensure privacy large windows were positioned opening to the back and right side of the building, the front was maintained relatively closed. Also, the large rammed earth wall extending for another 1.70m outside the guesthouse offers a small private and covered patio. Because of its thermic inertia, the green roof marks a difference in low and high-pressure areas in and around the construction encouraging ventilation. The small windows in the front provide cross-ventilation.

In every room windows can be opened up to ensure ventilation but can also be closed whenever it is colder outside. Screens are foreseen so mosquitos cannot enter when sleeping with the windows open. The roof has a 1.10m eave to the front and a 2m ‘free-hanging’ eave to the right side to protect the walls and bamboo structure. As stated, the terrain being situated on a slope needed to be excavated in order to obtain an equal ground level. Running rainwater from the mountain needed to be deviated through a 50cm broad canal behind the house, which later was finished off with a wooden ‘walkway/deck`. This was absolutely necessary to avoid water from entering during heavy rainfall. 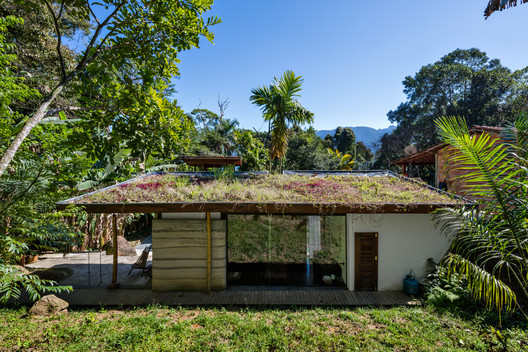