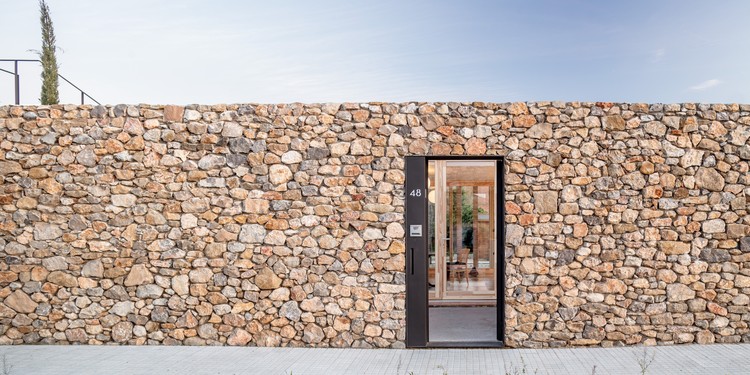 Text description provided by the architects. The AA house is a building thought to be a holiday’s house. It is situated at the end of the center, in a small village in the Baix Empordà region, where the common houses are made of stone and bricks. The site is next to the old road that connects Ullà with l’Escala and Torroella de Montgrí. It is the only access to the plot. This solar has a north-south orientation and it is well affected by the strong winds of Tramuntana.

The aims of our project are based on the will of designing a house integrated with the landscape created by the houses of the center of the village and a private space isolated from the noise outside. Having a bioclimatic house is also a priority in the project, it is to say, that the climatic conditions of the solar were used to achieve the most possible comfort and energy savings. The project is made of three clear and distinct, yet interconnected parts.

The first one is a compact wall that runs parallel with the road, made of stone from the neighboring, and with the door to the house and one of the garages as the two only openings. This compact wall isolates the house from the circulations on the road and also from the Tramuntana winds. The second and third part are two length-wise spaces with different functions. They are parallel with the wall. In the first one, next to the wall, there are the bathrooms and the laundry room. These volumes are made of hand-made bricks that help to fasten the compact wall.

They create three patios that give ventilation and natural light at the same time that separate the outside from the private zone. In the third part, there is an open-plan living space with the kitchen, dining and sitting room; and the bedrooms. All these rooms are orientated south, looking at the garden and the swimming pool opened to a terrace situated and in a superior level from the garden. In order to protect all these rooms from the solar radiation, the bedrooms have wooden shutters and the daily space a pergola for climbing plants, wisterias.

The interior walls of the rooms are made of cartoon-fibered plaster, a dry constructive system, in order to create a flexible open-plan living space adapted to the changing necessities of the clients; in the future. The constructive system is based on a framing made of concrete beams that land on the primary walls, and show their edges. The primary walls in front of the road are made of stone and the others are made of bricks with a hand-made process of firing.

There is a difference between the way of working the bricks in the first longitudinal space and the second. In the second open space, at the garden and swimming pool the bricks are turned and work as small counterforts. This is our system to ensure the stability of the façades while having dry walls inside; in addition to achieving a remarkable interior façade.

As it is a holiday house, not to be used regularly; we decided not to work with the thermal mass effect but we planned a system façades and roof with a big thermal resistance. A 12 cm. thick thermal insulation material is used in the interior obtaining a continuous perimeter. This system gives us a good bioclimatic function and facilitates a quick heating of the spaces, actually achieving the necessities of the clients. All in all, we designed a house which is adapted to the clients’ needs, environmentally and energy responsible, as well as innovative and comfortable. 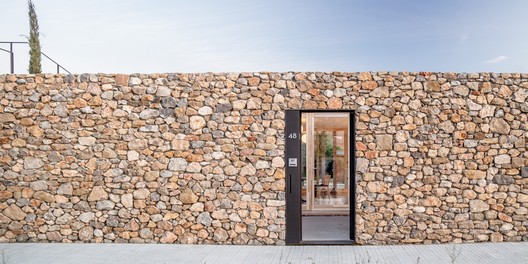