Save
Opinion: A Plea for Architectural History
Share
Or
Copy

This article was originally published on Metropolis Magazine as "Opinion: We Can't Go on Teaching the Same History of Architecture as Before."

Architectural students of my generation—the last of the baby boomers, starting college in Europe or in the Americas in the late 1970s—had many good reasons to cherish architectural history. Everyone seemed to agree at the time that the Modernist project was conspicuously failing. Late Modernist monsters were then wreaking havoc on cities and lands around the world, and the most immediate, knee-jerk reaction against what many then saw as an ongoing catastrophe was to try and bring back all that 20th-century high Modernism had kicked out of design culture: history, for a start. I drew my first Doric capital, circa 1979, in a design studio, not in a history class (and my tutor immediately ordered me to scrape it, which I did).

Furthermore, that was—as some readers may remember—a time of social upheaval in most European countries. Many leftist students (and we all were, to various degrees) saw design as an act of complicity with the capitalist order of things. To prepare the proletarian revolution the good Marxist architect of the late 1970s was expected to design unbuildable buildings, or, better still, not to design at all: “drop your pencil, study Brunelleschi, and load your Molotovs,” I remember one of our student leaders shouting from a barricade. The reason why he chose Brunelleschi (and not Melnikov, for example, or Hannes Meyer) as the inspirational pastime of choice for the architect of the Western Soviets to come was not immediately clear and it was probably due to sheer toponymy, as that event happened in central Florence, in a square called Piazza Brunelleschi.

Be that as it may, many of us ended up studying Brunelleschi, and other like masters, for much longer than needed for the purposes of any sound architectural training.

But when, barely 10 years later, I started teaching architectural history in a school of architecture north of the Alps, I found out, with some surprise, that architectural historians and their constituencies in that country were of a quite different ilk. The general expectation there was that, given my interest in the history of architecture in general, and of the classical tradition in particular, I must have been a Roman Catholic, with a sister in the Orders, and a brother in the army; an aristocrat, and the owner of at least a small castle in Périgord, better if attributed to the school of Le Primatice.

As none of the above was the case, I investigated the reasons for those assumptions, and I realized that, in many parts of Europe, the history of architecture was still often seen as the outward and visible sign of the territorial roots of some abstract, collective identity: the identity of a people, race, religion, or tribe—of any group willing to assert its hereditary rights on some portion of land, and claim: We are here; we have always been; look at the way we build, ye foreigners, and despair.

Such Romantic notions have been around for a long time; they are sometimes harmless, but sometimes not. From the Germanic ideology of a mystical union of blood and soil to the wars of religion in the Balkans in the ’90s, countless people have died because of these ideas. In the wrong hands, such views of architectural history can kill. They have already killed aplenty.

That was also the time when postmodern historicism started going global, and with it, as often happens, rose some notion of the universality of the architectural tradition thus conveyed—which was, mostly, the European tradition: Greek and Roman, Romanesque, Gothic, Renaissance, Mannerism, and the Baroque—in short, the syllabus of the history survey then taught in most architectural schools in Europe and in the Americas. But timelessness and universality are slippery ideological slopes. Universality? How did that come to be? If indeed this architectural tradition has conquered the world, should we not assume that it is better, somehow, than all the others traditions that didn’t?

Political scientists have an expression to refer to a similar ideological conundrum. They call it the “Plato to NATO” issue. Until not long ago, “From Plato to NATO” could have been the actual title of a first-year survey on the history of Western political thought. But the notion of a steady linear progression from Athens to Washington also suggests that classical ideas of democracy, liberalism, and science are the foundation of the West’s prosperity and domination of the world (at least until the forthcoming elimination of NATO itself—a more recent, quite unexpected development). The architectural equivalent of this globalist, Western-centered syllabus could be titled “From Vitruvius to Eisenman.” For that is the Western canon that every architect around the world was supposed to be conversant with. Until recently.

The West could often be generous and enlightened—when it was winning. Times have changed. Today, what used to be a benign theory of teleological progress—supposedly self-evident—has turned into the aggressive stance of rabid ideologues and bigots advocating the superiority of Western values, and of Western identity—including architectural—against all others. None of us—or at least, no one I know, in schools of architecture or elsewhere—would want to be party to that nefarious plot. That’s why we can’t teach the history of architecture from Vitruvius to Eisenman any longer (nor to Zaha Hadid, for that matter; even though we may at least welcome the addition of a non-white, non-male name at the very end of the list).

The problem is that, once the Western architectural canon has been thrown overboard, together with its now unpalatable ideological ballast, nobody seems to know what else should replace it. Some have tried to expand the canon, which is an excellent and promising but challenging plan. More worryingly, many are simply doing away with all architectural history altogether, just to be on the safe side, and replacing it with trendy and vastly consensual topics such as the theory of scuba diving, the prehistory of computation, or penguin studies (I am not making that up).

Far from me to challenge the general relevance and import of such topics. Let us be aware, however, that in many schools of architecture in Europe and in the Americas, including some of the best, we are now—for the first time ever—training a generation of architects who may graduate without having ever even heard the names of Michelangelo or Le Corbusier, or without having ever seen a Gothic cathedral or a building by Mies van der Rohe. Are we sure that this is what we want? Is this good for design, and for the design professions?

I have a feeling it isn’t. One reason for that seems banally evident: the history of architecture is an inventory of solutions already found and problems already solved. So it grieves me very much to see so many students today waste so much time reinventing the wheel at every turn, due to their sheer ignorance of precedent. Besides, the classical tradition developed so many strategies and methods and tricks and tools over time precisely to assess those precedents, when relevant; then filter them, reinterpret them, and adapt them to the problem at hand. That used to be called imitation.

For centuries, imitation and creation were seen as inseparable: neither could exist without the other. Today, nobody knows what imitation means; so even when we happen to stumble upon some precedent worthy of our attention, most of the time we do not know what do with it, other than a photocopy (or a Photoshopped collage). Quatremère de Quincy knew nothing of photography, nor of Photoshop; yet his theory of imitation would still help us to make sense of both.

For at the end of the day that is the whole point. It doesn’t matter that some history is good, and some ain’t. What matters is that the global history of architecture is an almost unlimited repository of precedents, which we can plunder at will if we have some notion of what’s out there. But that is only the start. History never repeats itself identically, so identical copies, as a rule, won’t serve any practical purpose. Ignorance of precedent is bad enough; photocopying, the zero degree of historicism, is possibly even worse. Cut and paste is a very dumb way of learning from precedent.

Post-Digital "Quitters": Why the Shift Toward Collage Is Worrying

A few months ago I attended a conference on architecture and computation-one of the many that, due to my line of work, I often have to take part in.

Mario Carpo is the Reyner Banham Professor of Architectural History and Theory at the Bartlett, UCL, London. His latest monograph, The Second Digital Turn: Design Beyond Intelligence, has just been published by the MIT Press. 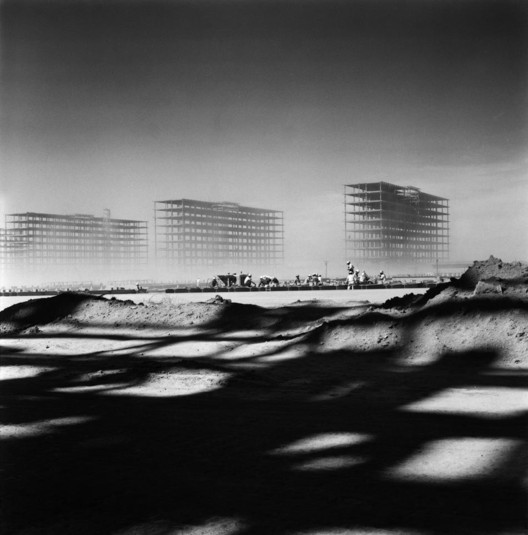