One of the star attractions of 2018’s Burning Man Festival was the ORB, designed and overseen by Bjarke Ingels, Iacob Lange & Laurent de Carniere. The 1/500,000 scale sphere of the Earth’s surface was designed to conceptually reference earth and human expression, intending to leave no trace following its deflation.

The designers wanted the giant sphere to act as a guiding landmark for festival-goers, and set up an Indiegogo campaign back in July to raise the remaining funding for the installation. In total, the team invested 30 tons of steel, 1,000 welding and sewing hours, and $300,000 of their own funds to make the ORB a reality.

Now, photographer Laurian Ghinitoiu has published an extensive set of images showcasing the construction and operation of the ORB during the Burning Man Festival in Black Rock City. Below, we have laid out some of the most expressive images, with the full gallery accessible at the bottom of the article. 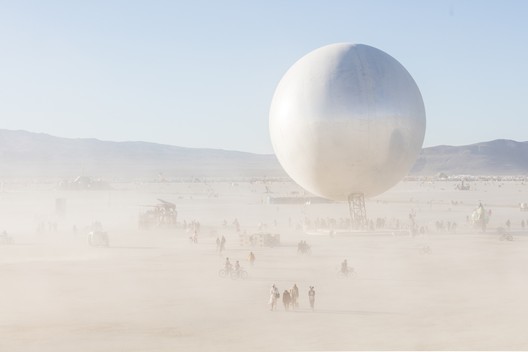