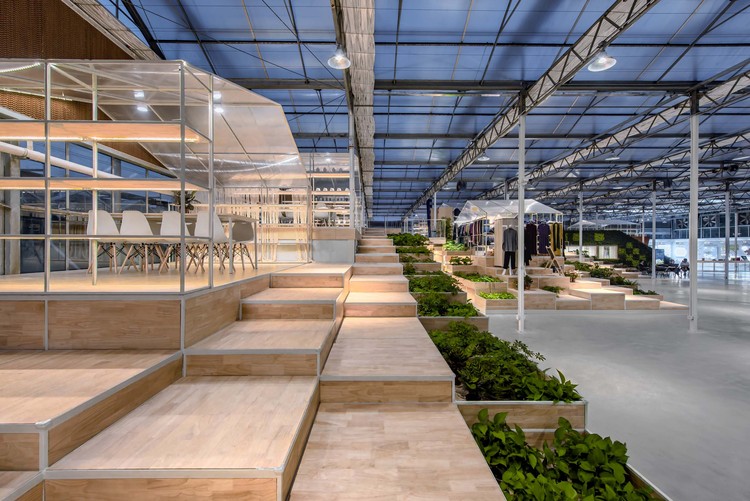 It is not an improvisation of experimental architecture, but an instance, aiming at the upgrading space in the countryside.

After Chinese cities experienced a rapid progress in construction, accompanying with a lot of disappointments and problems, Chinese architects begin to appear cautious when they treat with rural construction. If it is believed that contemporary urbanization in China could mostly learn something from western foreign, then the construction of countryside is believed undefined.

Under such time background, we can easily understand the challenges Antao architects faced with, in Jiaxing project, it is an agricultural glass greenhouse, covering an area of 2000㎡. It has been out of repair for many years, waiting for reconstructing eagerly. How to rebuild an ecological agriculture complex without damaging the original site and the architectural scale, under the condition of limited expense and the quick construction period? It seems there are no ready-made rules to follow. However, it becomes a reality in three months. Jiaxing Xi-Yue Village is not an improvisation of experimental architecture, but an instance, aiming at the upgrading modern-space in the countryside.

In this instance, the Antao group use modern design to finish self-upgrade of modern agricultural space, to provide urban people with a unique space carrier in the countryside for them to spend, and to spark creativity with the innovation of places. These three design strategies bring insight into an operational possibility for us, which are based on the modernism construction theory and the construction frame.

The first change: using modern design to arrive modern agricultural space
For thousands of years, agriculture is the basic production and organization forms of Chinese civilization. However, during the past several decades, the countryside became the area of population loss. The basic space of agricultural production, processing and consumption don’t keep up the pace with modern design. Such differences are reflected directly in the falling behind of the countryside. So the first change of this project is to change this simple and crude crop shed into a place for experiencing and processing modern agriculture. It is called “Food-Ji”, a place about food.

The “Food-Ji” in Xi-Yue Village provides abundant production ways to “eat farm products in the fields”. Organic vegetables, wheat salad, fruit and vegetable juice and so on are all from the fields of this place by picking instantly. It uses the delicate but simple procedures to ensure the best freshness, restoring the dainty of local farm products as soon as possible.

The modernization of this production way prompts architects finish the preliminary intention about the space, which is based on the design framework of construction module. Firstly, the design intensifies the outward face of the building. The pitch roof of the shed which is in geometric sequence and the unit repeated elements creates a kind of particular sense of rhythm. The climbing plants make the facades green and lush. The skylights in the building top have control system for sunshade. It can be used for sun shading and heat insulation in the daytime for the activity places. In winter, it can be used to increase the time of sun exposure and for heat preservation.

There are not many complex technical barriers in this process. The only notable point is the rencher system with mechanical fans. It utilizes fans to blow the drencher curtains, letting the water evaporate, at the same time the heat is absorbed. It can have a good effect of ventilation heat removal in summer. The construction mode of the whole village possesses the high level of construction completion, which is convenient and feasible. It is consistent with the sustainability and replicability of the agricultural space.

The second change: to provide urban people with a unique space for countryside holiday
The “Food-Ji” only with farm products is not enough. Both architects and the owner of the village sense a more valuable topic, which is how to realize the transformation of the consumption.

A large Chinese agricultural population migrates to cities. It is an irreversible fact. While, urban people go back to the countryside and consumes in leisure time becomes a new tendency. There is only an hour’s drive from Jiaxing to those three big cities, Shanghai, Hangzhou and Suzhou. And when it comes to sunshine and green plants, Jiaxing has the unique superiority. But one of the premises to set up consumption space is the urban people’s identity with the countryside. Such identity is not only from emotion, but also depends on the aesthetic framework of the physical space.

In this project, the space with 6 meters storey height forms three-dimensional landscape by piling up the structural units, which are all 1 meter square. It creates a shopping place, open but introverted. It is called “Market-Ji”, which means market. This market adopts the traditional market form. The stalls are scattered in every corner under the shed and form streets and lanes in some parts. Varied organic farm products, precision-machined subsidiary agricultural products, clothes and fabric art and so on, pass a healthy idea, which is green and pure.

The design layout is from the village concept of traditional residential culture, which is living in a clan. Above the overall space, it builds picturesque disorder activity places. And the space beneath them works as the auxiliary function, providing the space for the party, reception and food processing rooms and so on, to enrich the service idea of the market.

The third change: to spark creativity with the innovation of local country living.
On the basis of the previous two changes, the third change in this project is to challenge some future new possibilities of the places, which is also the most difficult step. It is called “Art-Ji”.

In the future that city capital reformats rural China, the space chances of Chinese countryside are not only depend on agricultural production and holiday consumption of urban population. If there are some chances, the real charm of Chinese villages is more likely from creative art industries with agricultural characteristics. Where there is an industry, there is popularity. Living and working in peace will only further improve the environment quality of rural China.

“Echigo-Tsumari Art” in Japanese, “Bishan plan” in Yixian County, Anhui, “Art Restoration Movement” in Xu village, Shanxi and “In the Central Field” plan in Taiwan all indirectly promote creativity upgrading of rural industries to varying degrees. Once agricultural has a stage of creativity, the space would play a role on catalyst randomly.

Therefore, in the “Art-Ji ” design of Jiaxing Xi-Yue Village, the key to the future is not the landscape construction, but how to activate creative space, to bring more new industries, to activate countryside resources, to inherit traditional handcraft art, folk art forms and other Chinese folk arts, to let more people create own cultural events and art activities by eating and playing, to enrich the industry pattern of agriculture, culture and tourism in Jiaxing.

Beside the expressway to Jiaxing, there is another expressway called “Internet”, which also bring Xi-Yue Village people and information. Since the Village open, it has held handcraft cultural festival, light food cultural festival and other festivals successfully, bringing thousands of people interactive experience. Maybe in the foreseeable future, it will have more forms to pass the beauty of countryside leisurely, agreeably and warmly by combing the art and the creation. 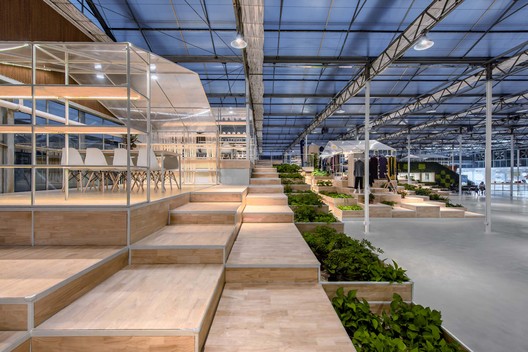