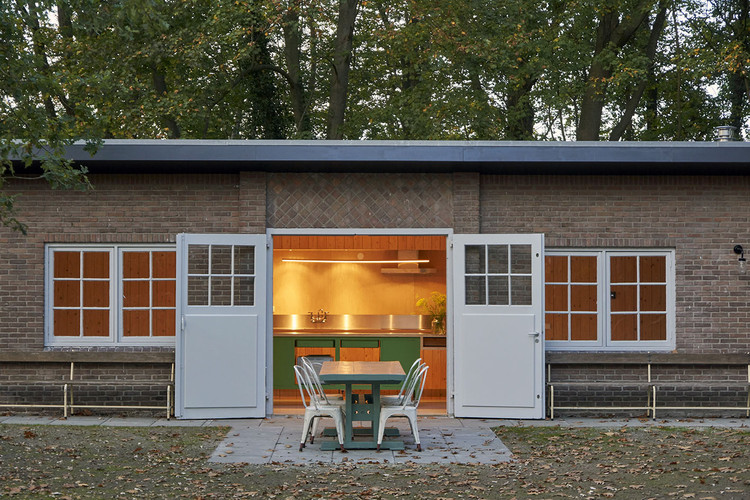 Text description provided by the architects. Following the holiday home that Piet Hein Eek designed in 2005 in the forest near Epse, we were approached by a family who has also purchased a plot of land a few hundred metres further in the same woodland. In this super beautiful place, in the middle of the woods in between the mature trees, are two old holiday homes linked by a garage in between. The elongated building with an open space on the south facade was in a poor state of repair and in no way met modern living requirements.

However, the position in relation to the sun and the open space with a view of the forest has a quality you can only dream of. Our task was to make the little house architecturally sound as simply as possible and to turn it into a wonderful holiday location for the whole family. The elongation created a problem as the rear façade faces the road (the dark side) and has almost no view. We wanted to situate as many bedrooms as possible on this side in order to create the living spaces on the other side.

This decision ultimately led to an obvious solution; to divide the narrow building lengthwise into two sections. The living area has a classical layout in three parts: the kitchen, the dining table and the lounge area. In this case, however, the layout is open and elongated with the kitchen in the middle, flanked by the other two areas. So the kitchen is positioned exactly in the centre, in the place of the original garage between the two old houses. In the summer, when dining outside, the layout can become even better as the table can then be placed outside, at right angles to the kitchen.

In order to create sufficient space for the kitchen, it is backed onto the bathrooms, which can be narrower than the bedrooms. The axis from left to right was not only important for creating a layout with the open living space on the sunny side and bedrooms on the shady side, but it also led us to add an apex to the roof of the building, which adds sufficient height to the bedrooms, as well as windows, light and air over the full length of the building.

This new solution for the roof was possible as it was originally in such a poor state that it needed to be replaced anyway. The characteristic old stone walls with windows and doors, the original reasons for purchasing the houses, remain. The beautiful new layout respects the existing elements, especially how the building was built in relation to its surroundings, and realises a roofing solution that developed from the limitations that the houses originally presented. 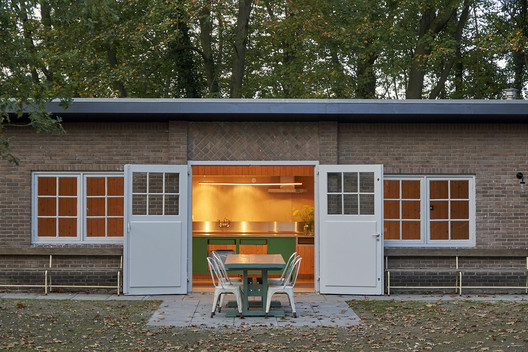