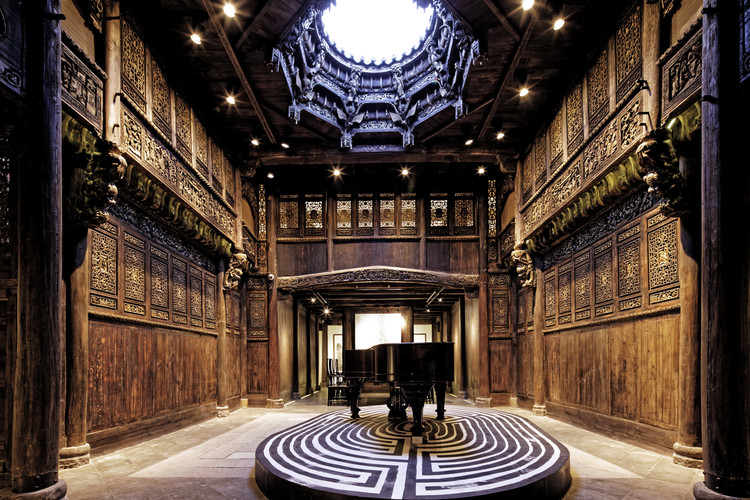 Text description provided by the architects. The Treasure House is located in the Art Gallery of the Himalaya Center in Pudong, Shanghai. The building was designed by the famous Japanese architect Arata Isozaki and is a famous building in China.

The Treasure House is a Qing Dynasty residence from Jingdezhen, Jiangxi. The specific initial construction period can not be verified. The part shipped to Shanghai is only the wooden structure part, the original bricks and tiles are not shipped, and part of the wood structure is supplemented components. The original building is a two-story, three-layer courtyard. Due to the limited space of the museum, only two layers can be accommodated. The term "accommodated" as used here refers to the installation of a residential building in the hinterland of China into a large box of reinforced concrete in the Modu City (Shanghai). And there is no natural light, relying entirely on lighting, which is just right for this function change from the residence to the exhibition hall, because the lighting form of the exhibition hall is best.

The ancient architecture of Jingdezhen was greatly influenced by the Hui-style architecture of the Ming and Qing Dynasties. This residence is typical Hui-style. The patio between the two layers is the most representative. It is called Sishuiguimingtang. The opening of the patio is not big, but the light and shadow are refined, full of ceremonial feeling, and the daily life is very practical. The height of this space in the museum is also limited, the ancient house has two floors, but the height are all not high, especially the upper floor, its top is a large structural steel beam, and the height of the bottom of the beam is only 2.4 meters. Originally it was envisaged to retain the bare state of the steel beam, but the volume of the 600-thick large steel beam is huge in front of the traditional wood structure. Moreover, the pipelines of air conditioners and electric wires are complicated and difficult to be clean and tidy. Therefore, only the suspended ceiling is used and the lower space of the steel beam after sealed with the gypsum board is only 2.35 meters. Fortunately, the gap between the steel beams has been raised after processing the ceiling shape, and the reflection of light trough partially installed makes the top less depressed. The ceiling shape adopts arch in several places to echo the wooden arched gallery roof at the entrance to the first floor of the ancient house. The upper part of this gallery is the space called Huimalang of the ancient house, and now it has also become the exhibition area. The local height of the museum's space near this corner is three floors, so the stairs are installed near this exhibition zone to connect the local three-story small exhibition room.

At the beginning, the ground floor at the atrium was paved with slate in the style of ancient architecture. The four sides were a step higher, and the middle was low (formerly for draining rainwater). However, the museum felt that it was not practical enough. Especially when the audience was concentrating on the exhibits, they were easy to step on the air and tripped, later it was unified into the same level, which made it easier to arrange larger exhibits. As the main display area of the first floor, the floor of the wing-rooms on both sides is covered with antique blue bricks. A traditional wooden slab system is still used between the two floors. The circular patio on the top of the atrium is the highlight of this ancient house, and the carvings are also very beautiful. The circular patio is rare in ancient Hui-style architecture. The top of the patio simulates the natural skylight on a cloudy day, which is quite realistic. There is no natural light in this space of the museum. In order to prevent the space from being dull, a luminous wall from the first floor to the second floor is set at the innermost end. The frontside gives the feeling of "window" and the backside illuminates the stairwell.

The second floor has more new elements than the first floor. In addition to the display function, a meeting area is set up as a small meeting and salon space. The implementation effect has basically adhered to the principle of “old is old, new is new” proposed by the designer, with the simple “new” to set off the complicated “old”, has basically realized the contrast and harmony between the new and the old in the conflict.

At the entrance of the museum, there is a strip of space with width of 3 meters, which is the space element of the street in the original place of the ancient house. The original gate building no longer exists, originally, the designer designed the entrance of a completely modern style, but the museum insisted on an antique gatehouse, and finally we had to simulate a relatively simple gatehouse. As the main elements of ancient architecture, wooden structure and powder wall are all available, but the element of "tile" is missing, because there is no way to copy the roof, there are also two local natural elements of “mountain and water” are missing. So the designer piled a few "mountains" on the wall opposite the gatehouse with small blue tiles, the composition technique is from traditional landscape paintings, reckon blank as inked, and the white wall left by large areas is like the "water" of the lake. The use of symbolism gives people an infinite association. There are also a number of luminous "bamboo poles" in the corner, which is like a close-up view, makes the picture layered.

Since the museum is a high-rise building, the fire protection is the highest level, and the old house is almost entirely wood, which is very difficult for fire prevention. If the automatic sprinkler system is installed, the pipeline will definitely destroy the wood structure of the ancient house, both structurally and visually. In the end, four gas fire extinguishing nozzles have been installed at the four corners of the space to solve this problem. 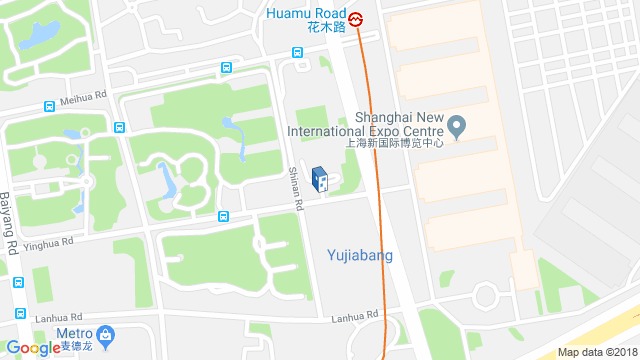 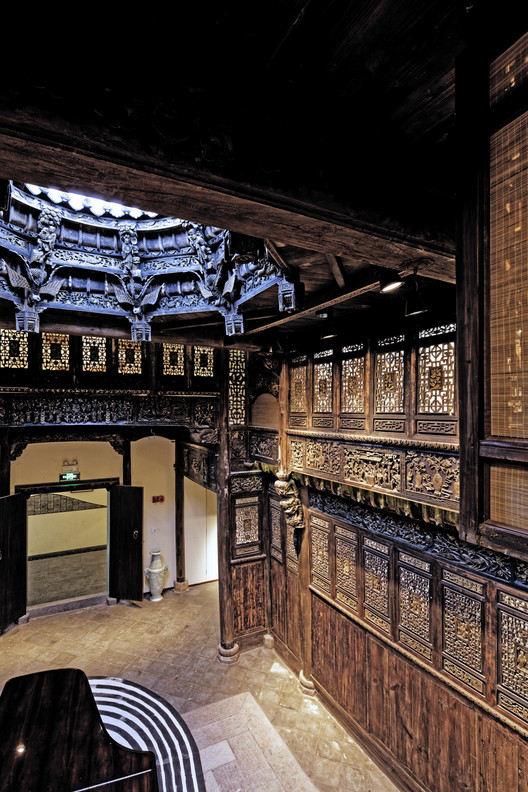 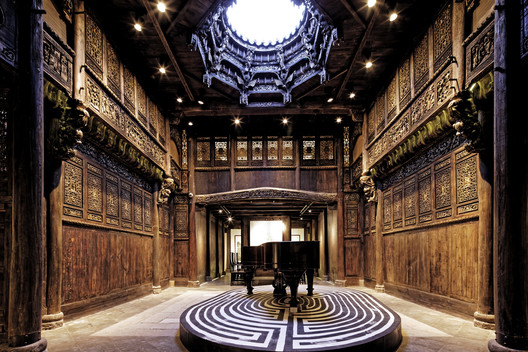