Studio Gang, an architecture firm and urban design firm recognized for their ingenuity and creative approach, has partnered with SCAPE, the NYC-based design-driven urban design and landscape architecture firm. The international architecture community has recognized both firms’ female founders, Jeanne Gang and Kate Orff, respectively, as innovators in their design fields. Together, these firms have created the selected proposal for Memphis’ waterfront.

The waterfront’s edge is composed of five zones: Fourth Bluff, Mud Island, Tom Lee Park, MLK Park, and Greenbelt Park. Areas like Tom Lee Park encompass a vast area of flat terrain, pedestrian paths, and simple amenities. The park’s greatest feature is its view that spans both the natural and urban elements of the city’s landscape.

The project was driven by establishing a concept based on three design principles: foster, restore, and connect. The Studio Gang/SCAPE scheme fosters civic pride and local identity while restoring the natural ecology of the waterfront and connecting elements of the waterfront to the downtown.

“At the core of our work, we believe in a process of co-creation to translate complex visions into realizable actions alongside neighborhoods and stakeholders. Tom Lee Park presents a tremendous opportunity to engage Memphians and visitors alike with the Mighty Mississippi.” – Kate Orff, Founder, and Principal of SCAPE.

Previously selected by ArchDaily as one the world’s best architectural firms, Studio Gang’s expansive portfolio spans building typologies. The design for the Memphis Riverfront allows visitors to engage with the area through various activities that will appeal to a diverse set of people. The project began with a careful study of the site, its civic and economic potential, and community engagement, as well as an ecological analysis.

Made possible by a partnership with The Memphis River Parks Partnership, the organization will work closely with the design team and the Memphis community to introduce additional public engagement opportunities throughout the project and integrate the development of the waterfront into the local culture. 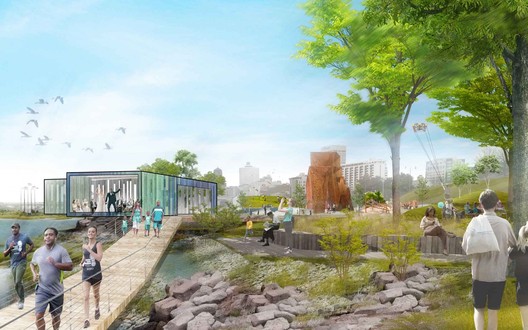