The office building Torre Reforma in Mexico City has won the prize for the world’s most innovative high rise awarded by the Deutsches Architekturmuseum (DAM). One of the world’s most important architectural prizes for tall buildings, the International Highrise Award is presented every two years to the project that best exemplifies the criteria of future-oriented design, functionality, innovative building technology, integration into urban development schemes, sustainability, and cost-effectiveness. 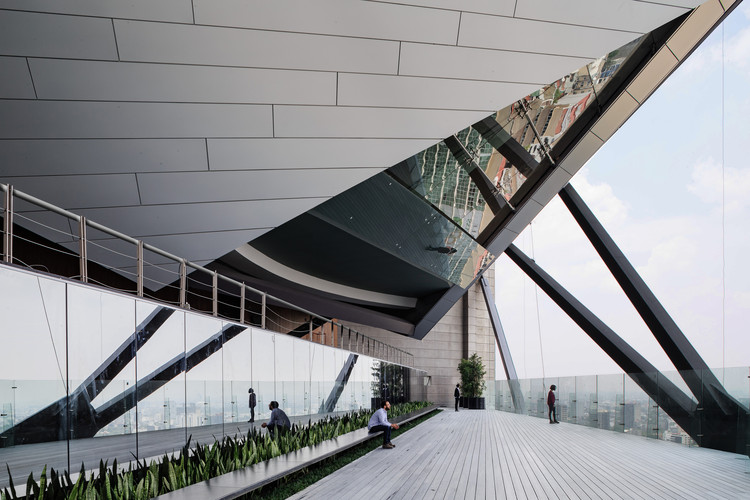 The prize, a statuette by the internationally renowned artist Thomas Demand and EUR 50,000 is awarded to the planners and developers jointly. Architect L. Benjamín Romano received the prize statuette and the prize money today at the awards ceremony in Frankfurt’s Paulskirche this evening. The IHA prize was awarded by Dr. Ina Hartwig, the City of Frankfurt Deputy Mayor for Culture, Dr. Matthias Danne, Member of the Management Board responsible Finance, Treasury and the Property business division at DekaBank and Peter Cachola Schmal, Director of the Deutsches Architekurmuseum (DAM).

DAM described the project and the innovation behind its design. "In contrast to the internationally enduring trend toward residential towers as well as ever-larger mixed-use projects in Asia, this year’s prize-winner is once again a classic office building. Here, however, it is only the type of usage that is conventional. The prevailing problem of earthquakes in Mexico City calls for an intelligent support structure concept, which lends the 246-metre-high office tower its striking appearance. In doing so Torre Reforma by L. Benjamín Romano places Mexico’s capital on the world map of ground-breaking highrise architecture."

L. Benjamín Romano said that, "This award is especially valuable because it comes from my peers – architects, engineers, developers – who can appreciate not only a building on itself, but the inherent financial, structural, environmental and normative challenges. I believe that the best architecture is the one that finds the answer to these challenges. The one that emmanates from needs, context and reality, and not only from someone’s imagination or aesthetic taste."

In the middle of a region at risk of earthquakes the characteristic façade of the Torre Reforma in Mexico City has more than just aesthetic purposes. The two massive outer walls of exposed concrete and the third vitreous side not only create an extraordinary triangular footprint, but also provide a maximum of earthquake- resistance. The concrete walls reach 60 metres into the ground as a solid fundament. Moreover, the building can move with the forces since large openings are left out from the massive walls as ‘crumple zones’ and since the steel braces, which carry the floors, merge into flexible hinges in front of the glass façade. During the severe earthquake of September 2017 this concept has already proved to be highly effective.

Beginning at a height of 200 metres, one of the two concrete walls bends strikingly inward. This feature is a response to Mexico City’s building regulations: the skyscrapers on Paseo de la Reforma may be no more than twice as high as the width of the street. If a building exceeds this height, the upper part has to be recessed or tapered. Due to Romano’s creative handling of this regulation the building, depending upon the observer’s point of view, does not only change its materiality, but also its sculptural form.

The entire width of the building’s third, glass side opens onto the Bosque de Chapultepec city park. In order to create additional usable space, the storys here break free from the narrow corset of the triangle. To the front, the seemingly smooth façade forms a nearly imperceptible fourth corner. 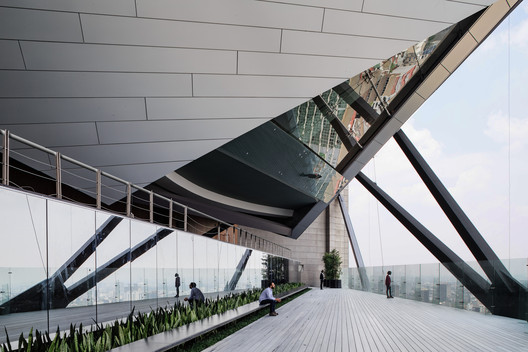