Prague's architecture is known for a patchwork of buildings ranging in styles and eras. A recent proposal for the redesign of the Trojska Skola aims to supplement a similar cohesive attitude to the space. Titled, Dissonant Unity, the project designed by Stefano Corbo Studio explores the ways to incorporate new programs and increased public space to an existing grammar and primary school with an attached sports center, auditorium, and cafeteria. 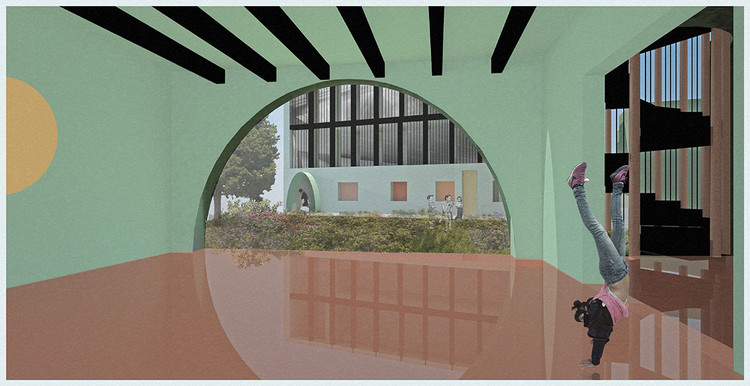 The original construction from 1928 will house the grammar school that includes multiple classrooms, multimedia spaces, and storage areas, while preserving the basement as is. The 1951 and 2010 additions will be altered to create a new building for the primary school featuring a large multipurpose hall on the ground level with further recreational program on the upper floors. In correlation to these spaces, the new building accommodates a caretaker apartment along with ecological and visual arts classrooms. The proposal also advocates for more communal spaces, such as the creation of the grand hall that serves as a public event space and cafeteria.

Instead of occupying the complete site, the project proposes for a more condensed built area to allow for the creation of vast green space for students to occupy during the day. Possibilities of having playgrounds, a basketball court, and other outdoor amenities now seem more plausible in this scheme despite being in a dense urban fabric.

Reiterating the concept, each of the individual programs has its own entrance and autonomous layout but is connected by a new circulation system to create "an interconnected agglomeration of distinct fragments." This enables a more dynamic environment to have multiple activities ongoing without being disruptive to each other. The circulation strategy is intended to trigger interaction; the two entrances are connected by a public promenade as a central focal point for such encounters and help to unify the complex.

The bricolage of round arches, irregular openings, and semi-circular patterns is intended to accentuate the random yet intentional cohesiveness of the project's planimetric layout. The arches draw inspiration from the history of the city of Prague, with its vaulted buildings, while the circular external staircase reflects the design principles of modernism as seen in the Czech Republic.

Through this formal and typological language deployed in the design, a homogenous ensemble is created to allow the old and new to simultaneously coexist.