The statue sits on the Sadhu-Bet Island, approximately 3.5 kilometers south of Sardar Sarovar Dam in the Narmada district of India. The unveiling of the statue will coincide with Patel’s 143rd birthday and celebrates his leadership in the country’s struggle for independence.

The statue surpasses the Spring Temple Buddha in China, which stands at 128 meters, as being the world’s tallest statue. The statue required over 18,000 tonnes of reinforced steel and 1,700 tonnes of bronze, engineered by Larsen & Toubro.

The statue sits on a base which houses a visitor’s center and a series of display halls dedicated to Sardar Patel and the history of India’s independence. A viewing area is located in the chest of the statue, providing panoramic views of the Narmada River and the Shoolpaneshwar Wildlife Sanctuary, whose lush green landscapes surround the site. Within the chest of the statue, visitors will also be able to view the structural detailing of the micro-panels that create the massive sculpture, giving them an indication of how the statue was assembled.

Foundations for the statue were laid on October 31st, 2013 by Modi in his role as chief minister of Gujarat. Since then, it is estimated to have cost $430million, funded predominantly by government and public sector companies. The statue is thus received criticism and accusations of misuse of public funds. 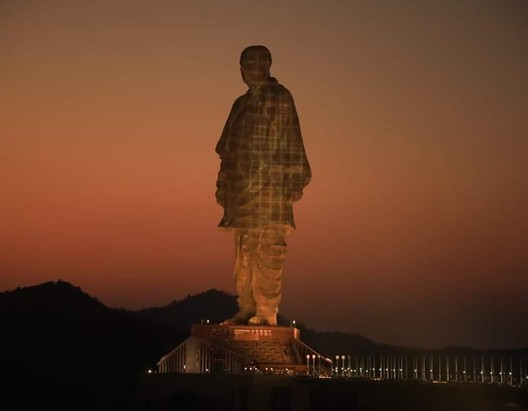