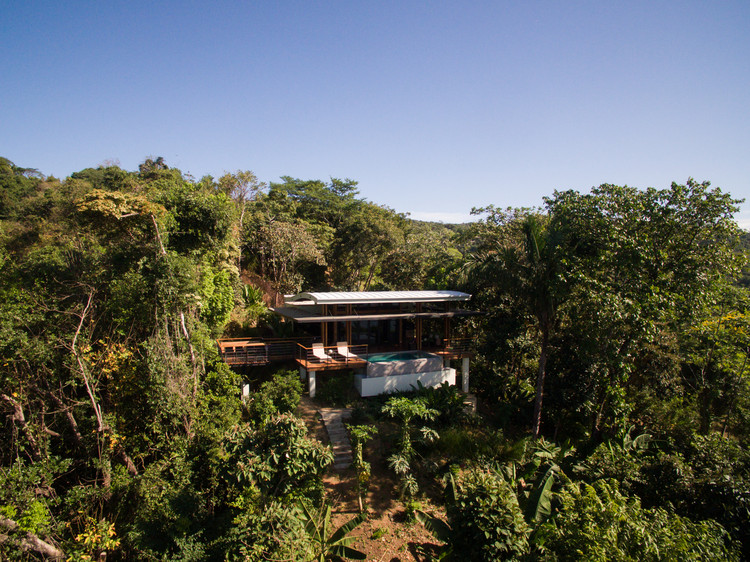 Text description provided by the architects. This Project is a house of small format, studio type, which was conceived as part of a plan with other houses that will be built in the future. It is located in the mountains of Malpaís, Costa Rica, in a property with vegetation typical of the tropical dry forest. The house was located in a way that is not going to interfere with the view of other houses that are projected in the master plan. Using this location, the existing trees were not cut and it was possible to take advantage of the amazing view of the north Pacific coast. The selection of the site was done with extreme care, and the specific point has an excellent view of the sunset and other natural phenomena: from the deck, it is even possible, during certain months, to observe whales.

The house is almost a bedroom, which disappears and merges with the exterior when the blinds are open. The tall windows that open up completely to the deck, help out to make the most of this interaction with the outdoor space. This relationship between inside and outside was maximized with the design of a bridge, which extends like an arm, and allows to touch the branches of the trees around the house. In the pool, it is possible to see the ocean from above and the trees at the same level, and it’s probable that a curious monkey finds its way to the house. The design was also influenced by the empathy that the owner has with the ocean. This was perceived from the beginning and the project reflects it. The shape of the roof resembles the wavy ocean. The location, high and privileged, reminds us of a yacht cabin that seems to navigate in the forest canopy. And the exterior bridge is almost like a bowsprit, pointing north.

To design in the Pacific north coast of Costa Rica is a subject that needs to be carefully considered to avoid loose ends. Things like the temperature, corrosion, having big openings to take advantage of the views and the incidence of the sun need to be analyzed and incorporated into the design. All of this reminds us how the old houses were built in this area, where all those elements were considered. Even though this is a contemporary design, the essence of those old houses was preserved, like the way to protect the interiors from the elements and how to make it fresh in the inside. However, the traditional roof shapes were discarded and long curved and straight lines were projected to protect the glasses that were used to open up the views and avoid the direct solar radiation. Regarding the materials used in this project, it is a mix of new and traditional materials.

For example in the pergola, the material combination helps out to filter the bright light and repel the dry season intense heat. For the floors and exterior paths, natural stones were used to decrease the temperature. The closeness of the trees provides shadow to the house and the air currents were exploited to provide a sensation of natural air conditioning. The teak and melina wood that was used is from controlled plantations which are located around 10 kilometers of the construction site. In general, the majority of materials that were used, like cement, blocks and others are from national fabrication. There were a minority of materials that were imported, like the natural stone.