Following his election a few months ago, the current president-elect of Mexico, Andrés Manuel López Obrador, announced that a referendum would be held to determine whether or not the government should proceed with the Foster + Partners and FR-EE's proposed 13 billion dollar project for the International Airport of the Mexico City.

Making good on his campaign promise, a public vote on the project's fate was held from 25-28 October, asking citizens to answer the following question: Given the saturation of the International Airport of Mexico City, which option do you think will be best for the country? The two options given to voters were:

Only 1 million people voted (the country's population is approximately 131 million). 311,132 participants voted for the new airport (the Texcoco option) and 748,335 voted to refurbish the existing airport. Despite this low turnout - less than 1% - the vote is purported to be binding.

This controversy comes amidst the fact that construction had already started on the new airport and that it was expected to open as soon as 2020. It is not clear how much money has already been spent on the project, but questions regarding the cost-efficiency of the new outcome have already begun.

The result has additionally triggered a depreciation of the peso; 1 USD is now equivalent to 19.70 Mexican pesos.

So far no official statements have been made by Foster + Partners or FR-EE. However, Fernando Romero, the founder of FR-EE, shared a tweet written by Juan Pablo Castañon, President of the Business Coordinating Council (translated below).

"We recognize the citizens who expressed their opinion in the consultation about the airport. However, we reiterate our position that this consultation, as it was organized, should not be binding and did not offer guarantees of impartiality, certainty, and objectivity."

According to El Financiero, there is speculation that the cancellation of the New International Airport for Mexico City may open the door for Mexico to be taken to international courts. Moisés Kalach, coordinator of the Strategic Neurological Advisory Board, stated that this is one of the conclusions of a study carried out by private initiative.

Following the vote, the current president-elect publicly endorsed the Santa Lucia project (the refurbishment option, listed first in the public vote), pointing out that the current airport will be improved and the Toluca Airport will be reactivated.

The decision made by citizens is rational, democratic and effective. Since the analysis began on this matter we showed that the interests of companies and investors were safe, there are funds that support the commitments in contracts and investments but besides that there is support, our word, our authority moral and policy to address any claim of companies or investors.

See more about the Santa Lucía project, headed up by Grupo Riobó, here. 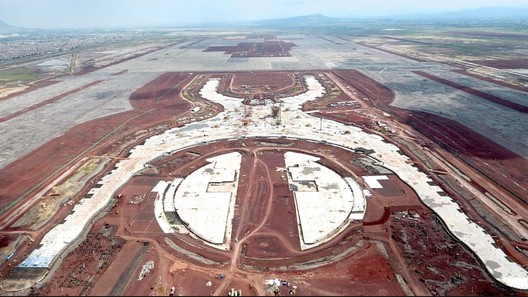