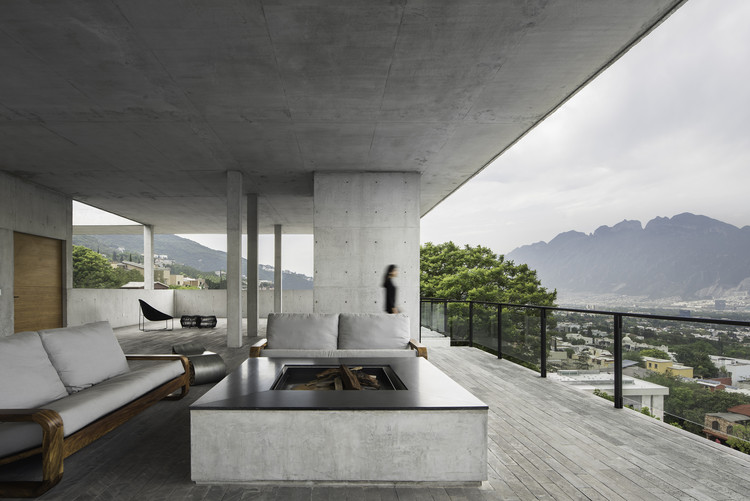 Text description provided by the architects. The project concept is a stereotomic box of concrete. A stone element that sits on the mountain. The property, of pronounced topography and north orientation provides the ideal elevation to contemplate the city and the views to the mountains that surround it.

The project is distributed in 4 levels. The form is the result of adapting to the site levels, exploring the routes and a series of excavations that become patios, terraces and balconies.

From the street it is perceived as a contained volume, of a single level. Upon entering, everything is integrated by a raised roof that is access, auction and shelter for the main space of the project: the terrace.

The roof protects the house from high temperatures and direct sunlight. It allows the air to circulate regulating the temperature inside the house. It gathers rainwater and distributes it through a system of gargoyles and canals that surround the house.

Gaps in the deck allow the sun to pass to the courtyards during the winter. In the lower level is the oak patio that surrounded by the rooms and the library, the windows allow the vegetation to become part of the space.

The main staircase connects all the levels of the house giving lightness to the heaviness of the project materials. Made with steel and marble, seems to float between the concrete walls.

The social area functions as an open space that lives both between the central patio and the terrace.

Around the house there are other options of circulations, where the main elements are the aromatic gardens and the canals.

The plasticity of the concrete allowed to explore its formal possibilities in each of the spaces.